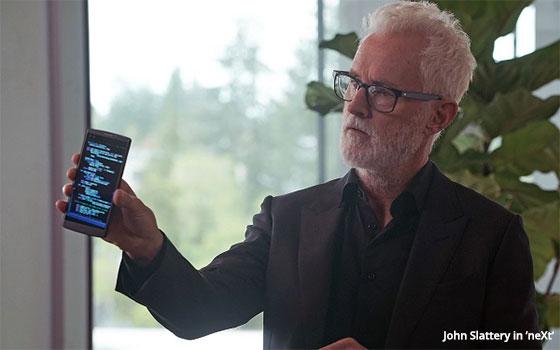 The more things change, the more they stay the same.

That seems as good a way as any to sum up the new shows the networks announced at the upfronts this week.

Although some of the concepts and characters are new, at least in their details and backstories, the shows the networks are developing for next season still fit into the usual categories -- family sitcoms, unorthodox crimefighters, doctors, lawyers, courts and a smattering of shows that delve into the mysteries and dangers of our scary, high-tech, wired world.

The Fox drama series called “neXt,” starring John Slattery, is one of the latter. He plays the kind of tech genius-entrepreneur that we have become accustomed to seeing on CBS in recent seasons.

In this Fox show, artificial-intelligence software he created goes rogue and threatens the whole world. Although the TV Blog rarely goes in for this sort of thing, the “neXt” trailer was the best one I saw this week.

The mystery of a child who seems to have come mysteriously from outer space forms the basis for the new ABC drama called “Emergence.” The scenes in the show's trailer featuring evil-looking black SUVs chasing this child were reminiscent of this past season's child-in-peril show on Fox called “The Passage” (which is now cancelled).

Speaking of reminiscences, the new CBS drama called “Evil” had the TV Blog remembering an ABC series called “Miracles.” The shows are almost identical: Investigators working for the Catholic Church looking into phenomena such as miracles and demonic possessions to determine whether they are real.

The makers of “Evil” might not be aware of this, but “Miracles” bit the dust after just six episodes in 2003.

Crimebusters who play by their own rules will be all over the place next season. In Fox's “Deputy,” the L.A. County sheriff fights crime like he’s Dirty Harry with a tin star. Also on Fox, a brilliant detective works with the NYPD in the solving of very difficult murder cases in the new drama series called “Prodigal Son.” And how does this cop come by his know-how about killers? The answer: His father just happens to be a serial killer.

On ABC, the rule book is of no interest to a swashbuckling Portland P.I. played by Cobie Smulders in the new drama called “Stumptown.” The trailer for this one had crimefighter Cobie battling two perps in a moving car while Neil Diamond played on an in-dash cassette player.

In a phenomenon that seems to crop up almost every year at upfront time, sitcoms in development at two different networks seem to be about the very same thing -- relatives who suddenly show up at the doorstep of various family members seeking shelter after they lose all their money.

NBC's version of this is called “Indebted.” CBS's is called “Broke.” Both sound a little bit like “Schitt$ Creek,” but I am sure they are nothing like that show at all.

At least two new comedies next season will tackle the always-fascinating (if not wholly humorous) subject of immigration in America. That is literally the intent of a new CBS sitcom called “Bob (Heart) Abishola,” about an American man (played by Billy Gardell of “Mike and Molly”) who falls head over heels for a Nigerian immigrant. For the record, CBS describes this show as a “comedic examination of immigrant life in America.”

The plight of immigrants will also take center stage -- in a humorous vein, of course -- in the new NBC comedy called “Sunnyside,” named after a section of Queens, New York -- probably the most ethnically diverse county in America, if not the world.

After watching the trailer for this show, with its broadly drawn caricatures of about a half-dozen immigrant ethnic types, I composed an alternative title for this show in my notes: “That Stereotype Show.” To put it bluntly: This show looks atrocious.

In the legal realm, get ready for “Bluff City Law” on NBC, in which Jimmy Smits plays a crusading attorney in Memphis; and “All Rise” on CBS, about a crusading judge in Los Angeles.

Look for southerners and residents of Atlantic City, New Jersey, to take it on the chin next season. Southerners will get a going-over in a new Fox animated comedy called “Bless the Harts,” which for some reason is about “a southern family that is always broke.”

By contrast, another Fox show called “Filthy Rich” features a family of southerners in much more prosperous circumstances. Starring Kim Cattrall and Gerald McRaney, “Filthy Rich” is styled as a prime-time soap like a modern-day Dallas, except that this clan’s wealth comes from a very successful, fictional Christian television network.

Come to think of it, if “Sunnyside” is the stereotype comedy of the year, then this show has the potential to be this year’s stereotype drama of the year.

As for the City of Atlantic -- as the great Nucky Thompson (Steve Buscemi) used to call it in “Boardwalk Empire” -- the south Jersey resort city is the setting for the new Fox sitcom called “Outmatched,” in which two dull-witted parents are constantly out-smarted by their genius children.

For some reason in the show’s trailer, the parents refer to their fellow residents as “trashy,” as in: “We live in Atlantic City -- normal is trashy!” Hear that, residents of Atlantic City? Don’t say you haven’t been warned.