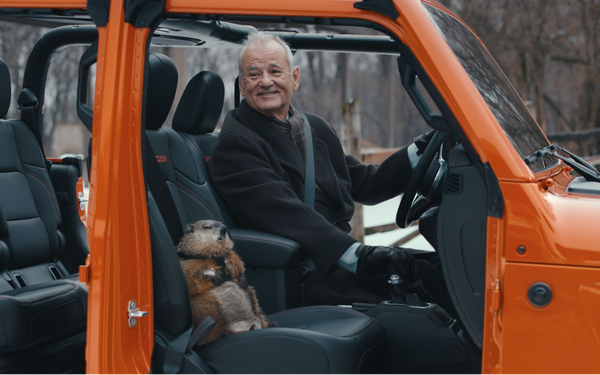 Fiat Chrysler Automobiles is back on the Super Bowl after a hiatus last year when the automaker ran its ads digitally only.

The spot was released online at 6 a.m. today in honor of the movie "Groundhog Day," which is the theme of the creative. It ran during the fourth quarter of the Super Bowl.

Groundhog Day falls on Super Bowl Sunday for only the second time in 54 years. The 60-second spot brings back key characters from the film including Phil Connors (Bill Murray), and Ned Ryerson (Stephen Tobolowsky).

Instead of using the original truck from the 1993 film as his getaway car when he kidnaps the groundhog, in the commercial Phil Connors takes the 2020 Jeep Gladiator.

The spot was created by HighDive in Chicago, which FCA worked with last year for its Jeep spots featuring actor Jeremy Renner.

Production took place in Woodstock, Illinois, where the original movie was filmed. Locations for the shoot include several that were in the movie, such as the bed and breakfast where Connors wakes up every morning, and the downtown area where he's greeted by Ned Ryerson.

In the movie, each day begins at 6 a.m. with Bill Murray’s character waking up to an alarm clock radio with “I’ve Got You Babe” by Sonny and Cher. That song, licensed through Sony Music, will also play during the commercial, with Bill Murray briefly singing along.

In the movie, after the song, two radio DJs come on the radio and talk about Groundhog Day. The Jeep brand’s commercial brings back one of those radio personalities to say “Today is Groundhog Day, and also a big day for football.”

Production had a crew member from the original set: The first assistant director was the second AD on the "Groundhog Day” film.