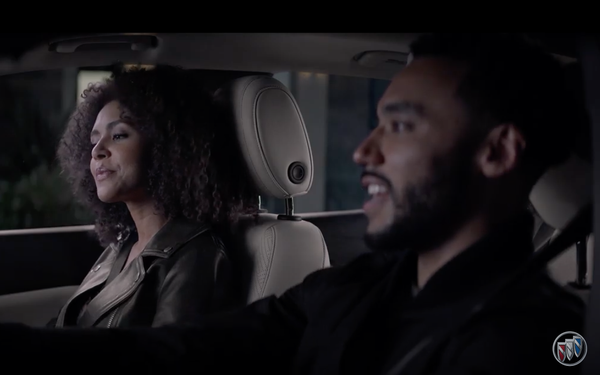 Buick is launching a marketing campaign with Amazon Alexa, a step in the brand’s strategy to reach new customers.

The campaign includes a tongue-in-cheek digital ad where a couple argues over whether the vehicle they are in should be called a Buick or an Alexa.

The effort also features a dedicated virtual showroom on Amazon and a custom Alexa “utterance,” a phrase that lets people ask about Buick vehicles from any Alexa device. If customers are interested, they can say “Alexa, tell me about Buick SUVs.”

The work, from Leo Burnett in collaboration with Amazon, will run through mid-September, spanning multiple platforms including broadcast, social media, targeted online video, and OTT (over the top) media like Amazon Fire TV.

Buick is the first automotive brand to develop a custom shopping utterance, she adds.

Voice search functionality isn’t new to vehicles, but in the past it was necessary to connect a driver or passenger’s cell phone to the vehicle via Bluetooth. With the new partnership, Amazon Alexa will be embedded into the vehicle without the help of an auxiliary device. Eventually it will be available on 33 models across all four GM brands.

At Buick, it is currently available on four model lines — the current Encore GX and Enclave and the discontinued 2018 Lacrosse and Regal — with a fifth (Envision) coming on board next year. The program is unique in that the discontinued models can still be updated over the air with the offerrng, Hrabovsky says.

The Encore GX target is “diverse, savvy and successful, late 20s to early 40s, craves technology that makes their life easier and more connected,” she says.

The automaker hopes the partnership will resonate with new buyers and be an answer for consumer desires, namely a demand for increased connectivity.

“Buick’s biggest hurdle is its brand perception,” Hrabovsky says. “There is what we call a false familiarity — people think they know the brand, but they don’t. Getting people to think differently about Buick is a motivation behind everything we do. … We are a brand that’s not afraid to take risks and have some fun.”