If NFL Players Want To Swap Jerseys This Season, They'll Have To Be Clean First 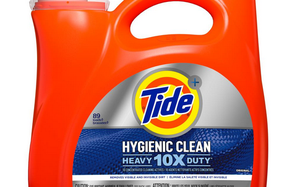 The gifting of a dirty jersey from one NFL player to another on the opposing team after a game has become something of a sweet tradition over the last few years.

This year, the league is prohibiting on-field exchanges. Instead, players will swap jerseys that have been laundered first. The NFL is suggesting -- but not formally requiring -- that Tide Hygienic be the brand used.  The clean jersey will be sent via the mail.

NFL Network’s Tom Pelissero wrote Monday night, “The NFL informed clubs tonight it is partnering with Tide, which will cover the cost of one replacement jersey per player -- all washed first and exchanged by mail.”

That seems to say Tide will pay for the jerseys being exchanged, but only once for every player -- per season, or per week?  Marketing Daily reached out to the NFL and Procter & Gamble for clarification.

An NFL jersey can run $300 or more, according to a 2017 Los Angeles Times story,  and last season, an NBC Sports story said some teams were charging players $500 or more per jersey for swapping.

Football is a game with rules, and the new jersey-swapping protocol comes with a half dozen of them.

In short, the NFL basically requires a player to officially tell his team’s equipment manager, by text, email or some other form of communication, that  he intends to swap.  The equipment manager must also remove the Kinexon contact-tracing device (a tool to promote social distancing) on the jersey.

The equipment manager then has to wash the uniform. Using Tide Hygienic is “encouraged but not required.” Tide became the official detergent of the NFL in 2012.

Tide Hygienic is a new product that, according to the Home Depot website, is "specially designed to remove impossible stains like grease, oil, blood and smoke."

There are two NFL games during the season when the NFL prohibits swapping because jerseys from those games are used for special auctions later.