What Is It About Cars And Dogs? 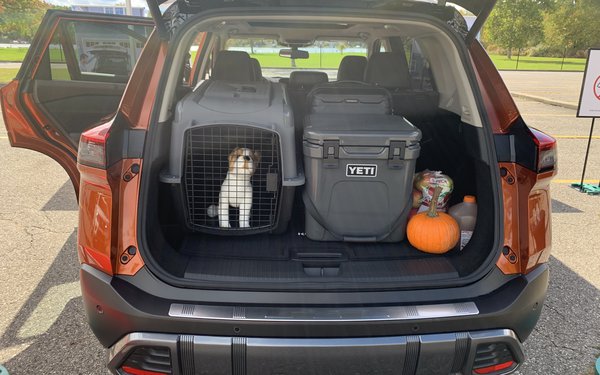 And let’s be honest, most dogs feel more joy during these rides than we humans could ever hope to experience.

At a recent Nissan Rogue driving event for journalists in Detroit, a large dog crate complete with a stuffed animal helped show off the compact SUV’s cargo room. As someone who has schlepped my fair share of dog crates in and out of the tailends of vehicles, I appreciated the visual.

Subaru recently announced it is bringing back its “Share the Love” sales event for the 13th year, which includes The American Society for the Prevention of Cruelty to Animals as a benefactor. From Nov. 19 through Jan. 4, with every new Subaru purchased or leased at one of the 632 participating Subaru retailers nationwide, Subaru will donate $250 to the customer’s choice of charities.

This is the fifth consecutive year there will be no cap placed on the total donation from Subaru of America Inc. to its “Share the Love” Event charitable partners.

Subaru is famous for putting dogs into creative, from the family of driving dogs (the Barkleys) to the tearjerker Impreza spot in which a man helps his dying dog check off every item on its bucket list.

Two additional automakers have featured dogs in their creative, but not in the happy-go-lucky, head-out-the-window way you might expect.

Toyota recently launched its 2021 Venza with a spot from Saatchi & Saatchi called “Lifesaver” which features a couple’s quest to save their beloved family pet. The owners leverage Venza’s performance capabilities to  maneuver roads and travel safely through less-than-ideal weather conditions during their search for the lost animal.

With additional help from the available digital rearview mirror, the family is reunited with their dog, “proving that Venza is everything they need when they need it most,” according to he automaker.

The happy ending is nice, but the spot is a little anxiety-provoking, at least to us literal-minded folks who have a hard time suspending disbelief.

It shows the dog running along and across roads — every dog owner’s worst nightmare.

Another automaker also recently featured a lost dog in a spot. The Kia Telluride spot, titled appropriately “What’s Been Missing,” shows a perplexing scenario of a young boy reuniting with his lost dog seemingly in the middle of nowhere.

It might have been an excuse for showing how the mighty SUV can navigate rugged terrain, but instead viewers are left wondering, how the heck did the dog get out in the middle of nowhere in the first place?  Negligent pet ownership is not good creative.

Earlier this year, Nissan debuted a lovely Titan pickup truck spot, “The Return,” with the surprise ending of a man returning a lost dog to its happy owner.  Why can’t all dog ads feel so good from start to finish?