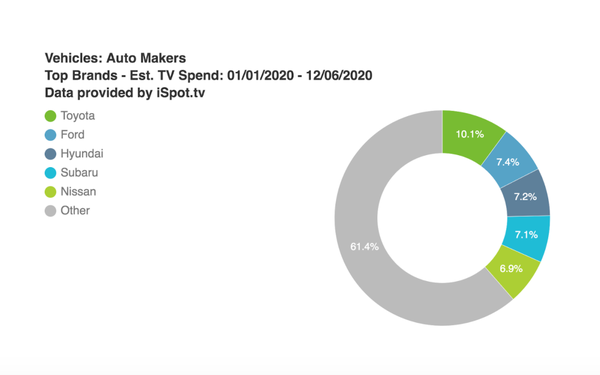 As was the case for all industries, automaker TV ad spending was affected by the various curveballs of 2020, resulting in almost a 21% drop year-over-year.

Toyota spent the most on TV advertising and subsequently garnered the most impressions.

While the end of the year saw industrywide spend and impressions levels normalize compared to 2019, the middle of 2020 still served as a transition period with much of the country under quarantine. Automakers needed new creative to reflect the times and limitations on in-person vehicle sales, which also took time to develop and deploy.

Auto brands leaned on sports once again, with 44.4% of spend (25% of impressions) coming from sports-related TV programming. In 2019, those numbers were too far off for sports -- 45.1% of spend, 33.6% of impressions -- the bigger difference was the raw totals. Across all auto brands, spend was down 22% during sports programming and impressions declined 38.3% compared to last year.

Though the industry totals were down, there were some brands that managed to increase spend year over year. Three auto brands -- Fiat Chrysler Automobiles, General Motors and Maserati -- advertised on linear TV in 2020 after not doing so in 2019 (through Dec. 6).

Once March began and it was clear that this wouldn’t be a typical year on TV,  auto brands changed advertising from “we’re here for you” messaging focused on community, to virtual sales, reopen/business-as-usual messaging, and then finally, holiday sales events to close the year.