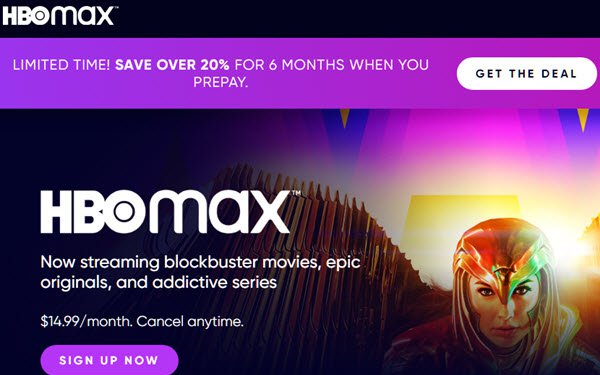 The promotion, which was set to expire on January 16, is now in place until March 1.

Launched three weeks prior to the Christmas Day debut of “Wonder Woman 1984” on HBO Max (and in theaters), the promotion was timed to maximize the impact of that premiere.

The HBO Max pricing promotion, WarnerMedia’s recent Max distribution deals with Amazon Fire TV, Roku and others, and its controversial decision to release all 17 of its 2021 tentpole movies on Max in tandem with theaters are all part of the company’s aggressive push to meet its stated HBO Max goals of 50 million U.S. subscribers and 80 million global subscribers by 2025.

HBO Max had just 8.6 million subscribers as of the end of Q3. But WarnerMedia has since added those key Amazon and Roku integrations, as well as debuting Max on Comcast’s Xfinity X1 and Flex platforms, and striking a deal to integrate it in Charter’s SpectrumGuide.

The Amazon Fire integration alone, in place as of the end of November, helped drive a 4-million jump in the number of HBO subscribers who have authenticated HBO Max, to 12.6 million, in the two months between the Q3 report and the second week of December.

In addition, WarnerMedia has now completed its acquisition of You.i TV, a provider of cross-platform development tools that will help HBO Max rapidly deploy direct-to-consumer offerings to platforms in markets around the world.

However, analyst Craig Moffett has estimated that WarnerMedia would need to net 8.4 million HBO Max subs in 2021 beyond those it was already projecting to make up for lost theatrical revenue.