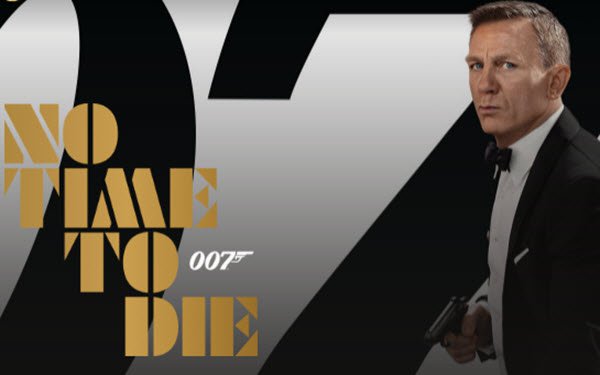 MGM Studios — and the movie industry in general — are hoping that the much-anticipated theater debut of “No Time to Die” today will live up to expectations, and the signs look promising.

Between July and September, the studio spent more than $20 million on promoting the film in the U.S., focusing on traditional television ads, with a small digital advertising presence, according to MediaRadar.

That’s on top of the more than $9 million MGM spent on ads between December 2019 and March 2020, before the film’s expected April 2020 debut was postponed due to the coronavirus pandemic.

The media mix was similar to the current one, with trailers aired on Fox, NBC, CBS, ESPN, TNT and Comedy Central among others, and a very small percentage of spend going to digital ads on Snapchat, E! News, Vulture, Fandango and NHL.com.

“Last year, the ad spend never really ramped up once COVID-19 emerged,” says MediaRadar CEO Todd Krizelman. “The initial delay helped in that it pushed the release to April. In early March, it was clear that release schedules might adjust, so the studio was able to avoid spending too heavily on marketing.”

MediaRadar estimates that MGM’s total U.S. ad spend for “No Time to Die” will exceed $35 million by the end of October.

Meanwhile, the indicators point to the movie’s being on track to shot at hitting $100 million in domestic opening weekend box-office sales.

The Bond movie’s advance ticket sales are overperforming expectations, and in many cases matching presales for Sony’s “Venom: Let There Be Carnage,” theater operators told CNBC.

“No Time to Die” is “perfectly positioned to build on” the Venom movie’s momentum, said Boxoffice.com Chief Analyst Shawn Robbins. While ticket buyers for Bond franchise movies tend to be older, Craig’s swan song as 007 is expected to draw consumers across generations, he noted.

For “hard-core aficionados, ‘No Time to Die’ represents a major milestone and a true not-to-be-missed cinematic event,” so “the potential is there for nine-digit opening weekend numbers the likes of which have not been seen since ‘The Rise of Skywalker’ opened to in late December 2019,” observed Comscore Senior Media Analyst Paul Dergarabedian.

“Skyfall,” the Craig-starring installment released in 2012, currently holds the record for highest-grossing opening for a Bond film, with $88 million in domestic ticket sales—and is the only Bond movie to exceed $1 billion in global box-office sales, according to Comscore.