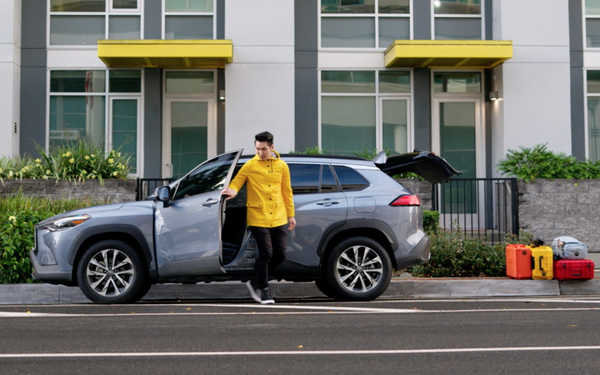 Toyota Motor North America is launching a campaign for the Corolla Cross that highlights the compact SUV’s capabilities.

The effort was developed using Toyota’s long-standing Total Toyota (T2) marketing model in which campaigns are integrated through one strategic brief, creative idea and media plan inclusive of multicultural marketing and the total market model, according to the automaker.

“Perfect Getaway” from Saatchi & Saatchi features a group of friends heading out for a weekend escape interrupted by bad weather. The rain clears so they’re able to pack up their Corolla Cross. As they’re leaving town, all the traffic lights turn green.

“Find Your Groove” from Burrell Communications features internet dance phenomenon Aubrey Fisher and his friends also packing for a road trip, making use of the automatic liftgate, spacious cargo area and five-passenger seating.

“Skate Instructor” developed by Conill Advertising, features professional skateboarder Paul Rodriguez Jr. The spot illustrates how the Corolla Cross delivers just the right amount of cargo space to fit his equipment, while showcasing the vehicle’s design and smooth moves on the streets, just like Rodriguez on his skateboard.

Intertrend developed two spots. In “Showtime,” a man picks up his new-to-America cousin from the airport, and then drives him to a one-of-a-kind view of the Northern Lights.

“Picture Perfect” features a content creator couple looking to amaze their followers with the help of the Corolla Cross. Through every turn of their drive, the couple, their dogs and the Corolla Cross are in sync to the beat of the music.

All spots conclude with a voiceover of the Toyota tagline “Let’s Go Places” and an end card highlighting the automaker’s sponsorship of Team USA for the Olympics.

High-profile prime and sports programming will include the NBA, NFL, NASCAR, Univision, Telemundo, OWN, Discovery en Español, WillowTV, and BET..

Partnerships include Apartment Therapy, Buzzfeed, Amazon and Spotify. Social will include a forthcoming TikTok collaboration.

Meanwhile, Toyota also recently worked with Intertrend on creative for the all-new 2022 Toyota GR86. Tapping into the brand’s Japanese sports car heritage, the spots feature the cult Japanese anime “Initial D” and highlight the 2022 GR86 alongside legacy car AE86 from the original manga.