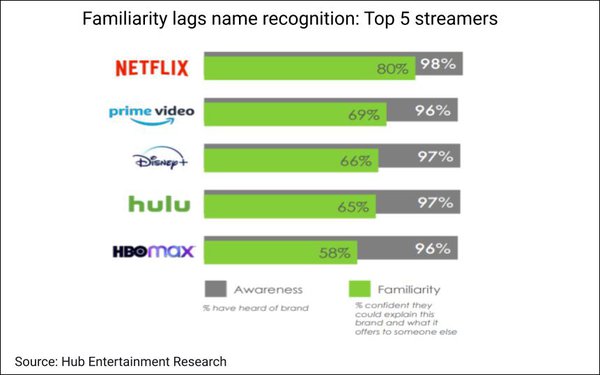 With Disney+ expanding its content focus and Warner Bros. Discovery management planning to merge HBO Max and Discovery+ into a single app, insights from a new consumer survey may be particularly timely.

Many consumers can’t articulate unique value propositions for even the largest streaming services, according to the fourth annual Hub Entertainment Research Evolution of Video Brands study, conducted in February among U.S. TV viewers between 16 and 74 who have broadband,

The survey found that the names of the five leading streaming platforms are nearly universally recognized. However, for four of the five, only about two-thirds or fewer think they could explain what these brands offer or how they are different from their competitors.

Specifically, 96% or more recognize the names of all five services (chart above). But asked if they feel confident that they could explain the brand and what it offers to someone else, the numbers dropped from 80% expressing confidence about Netflix, to 69% for Amazon Prime Video, 66% for Disney+, 65% for Hulu and just 58% for HBO Max.

Not surprisingly, viewers tended to express more confidence about describing brands they perceive as having a strong focus on specific genres.

On that factor, Disney+ came out on top (with kids’ content, theatrical films, and fantasy/supernatural most-cited as its key genres), followed by HBO Max, Discovery+ and AMC+.

Asked which genres they associate with each service, Disney+ and Hulu elicited the clearest associations. Hulu is perceived as strong in dramas, adult animation and anime.

The gap between name recognition and understanding a value proposition is even bigger for next-tier streamers.

Again, while most have heard of them, even fewer — half or under — feel confident they could describe the offerings of Peacock, Paramount+, Discovery+, Apple TV+ 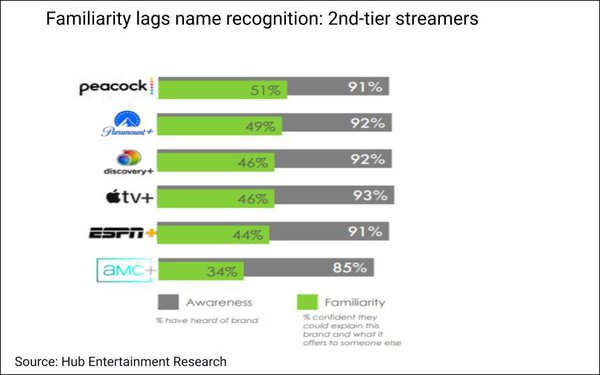 As for free-with-ads platforms, only one in three viewers expressed a solid sense of what differentiates one brand from another. However, both familiarity and awareness levels are on the rise for these brands, according to Hub. 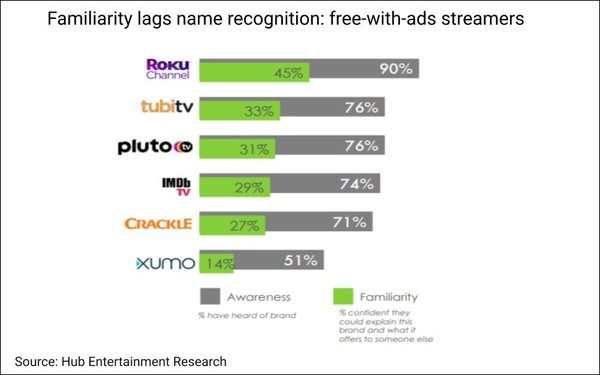 Several top streaming services are now considered indispensable by those 16 to 34, and Netflix and Amazon Prime Video are viewed as indispensable by both that younger group and those 35 and older.

In fact, asked which sources/networks they would pick if they could only have access to five, streamers made up the entire list among the younger consumers.

Among the older viewers, Netflix rose from third in last year’s survey to first this year, and Amazon Prime pushed ESPN out of the top five. The other choices are the traditional big-three broadcast networks. 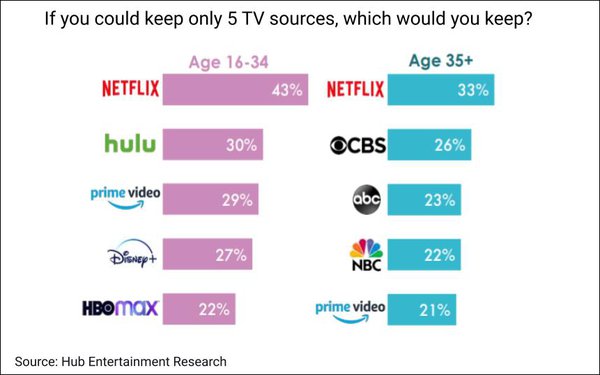 Looking at original content and churn, fully 36% of all respondents reported having signed up for a streaming service to watch a specific show or movie — up slightly compared to the past two years. 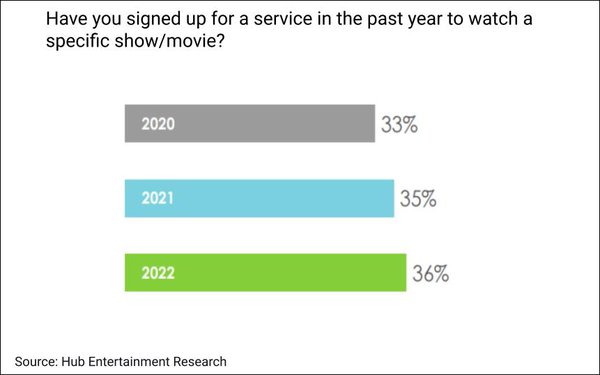 Further, 62% of viewers who engaged in this behavior reported subscribing to a subscription-based video-on-demand (SVOD) service. 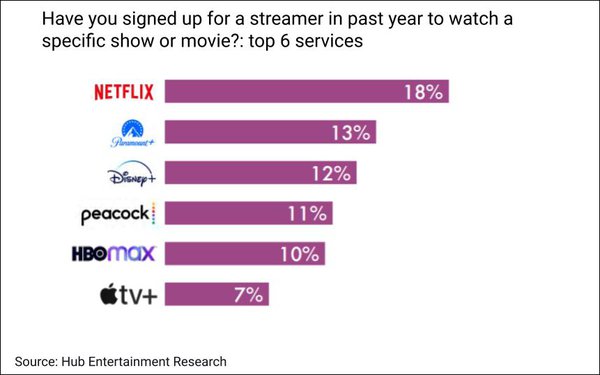 For this year's video branding study, Hub surveyed 1,601 U.S. TV consumers ages 16 to 74 who have broadband access and watch at last one hour per week (U.S. Census-balanced sample), with data collection completed in February.