Binge-Release Model On The Downslide Due To Downsides 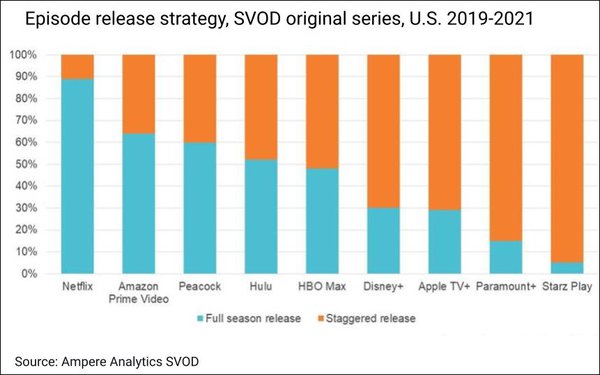 Netflix aside, the practice of releasing full seasons of series to facilitate binge-watching is becoming increasingly uncommon, according to a new study from Ampere Analytics.

Newer streaming services tend to favor weekly or gradual episode release model. HBO Max used the full-series release model for under half of its series between 2019 and 2021 (chart above). Disney+ and Apple TV+ used it for just 30% of their series during the same timeframe, Paramount+ for under 20%, and Starz Play for only about 5%. As of 2021, Hulu was using the two models about evenly, and Peacock and Amazon Prime Video appeared to be experimenting, with full-season releases used about 60% of the time.

Decisions not to follow Netflix’s example of releasing the great majority of its series on a full-season basis originated in part because newer entrants have a fraction of the original content of Netflix, with its huge library and frequent new original releases, and need to stretch out what they have over time to bolster perceived value, according to Ampere.

At launch, Disney+’s U.S. catalog was 10% the size of Netflix’s by total duration, HBO Max’s was 26% the size and Apple TV+’s was less than 1%, points out Ampere.  The number of flagship originals available in the first months of launch was also limited, especially due to delays caused by COVID-related production shutdowns.

Disney+ released episodes of new Marvel Cinematic Universe TV shows across 34 weeks in 2021, forcing Marvel fans who want to avoid spoiled plotlines to subscribe to Disney+ for most of the year in order to watch each episode at the earliest opportunity.

Then there’s the engagement factor. Ampere’s Popularity Score, which tracks online search volumes for titles each month, shows that engagement with a TV show decays faster with full-season releases than gradual ones.

The full-season release model was found to be associated with the popularity of Netflix’s top shows dropping to 80% of their premiere-month popularity within one month of release. In contrast, it took four months for top HBO Max shows released on a weekly schedule to show the same decay rate.

“A weekly release pattern more easily facilitates conversation around a show,” sums up Rahul Patel, Ampere senior analyst. “Between episodes, viewers have ample time to discuss and rewatch episodes, which is less likely to be the case if an entire season is released together. Hence, weekly releases can lessen the chance of engagement with a show decaying rapidly after its initial release.”

Allowing time for word-of-mouth to build could be particularly helpful for lower-profile titles. Releasing a whole season of a series lacking a connection with a recognizable franchise “runs the risk of it being crowded out in an increasingly competitive market,” points out Patel.