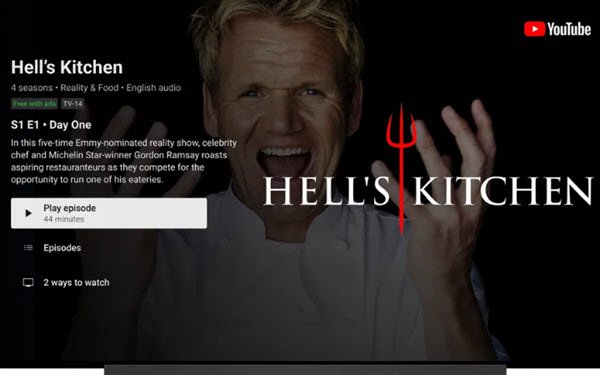 YouTube, which already offers some 1,500 streamed movies on a free-with-advertising basis, has now added access to nearly 4,000 back episodes of TV shows such as “Hell’s Kitchen” and “Heartland” for U.S. viewers.

The content expansion, in time for this year’s upfronts, is part of YouTube’s push to compete head-on with increasingly popular over-the-air TV (OTA), as well as free ad-supported streaming services and tiers from players including Tubi, The Roku Channel, Pluto TV, Xumo, Plex, Peacock, Vizio and Samsung, among others.

YouTube is promising to deliver up to 100 new titles each week.

While the audience available includes those watching on web browsers and mobile devices, YouTube is touting its U.S.-connected TV (CTV) reach, in particular—135 million as of December 2021, according to Nielsen data.

“More people are choosing to experience YouTube on the big screen with friends and family,” the YouTube’s announcement notes.

The platform is also looking to lure viewers away from competitive free-content options with improved navigation, a banner visuals and menus. Many titles are also available in high definition with surroundsound on supported devices.