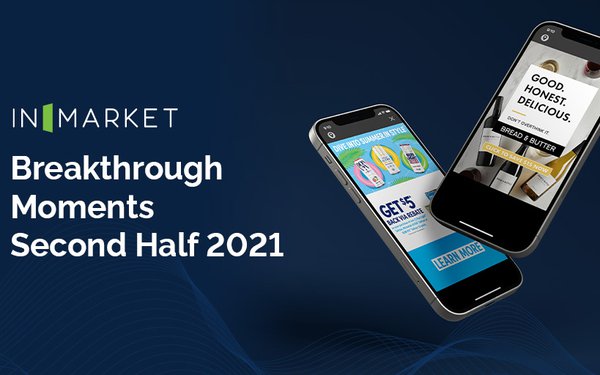 “What’s clear from the top-performing campaigns is that while alcohol prices are increasing and usage remains above pre-pandemic levels, consumers are seeking value during a period of record inflation,” Michael Della Penna, InMarket’s chief strategy officer, told Marketing Daily.

And Anheuser-Busch’s Stella Artois beer, in a holiday campaign collaboration with Water.org, offered a $10 rebate, resulting in a 9.45% CTR.

The other two Breakthrough Moments alcohol campaigns were Proximo Spirits’ Pendleton Whisky, which invited users to click to enter a sweepstakes (14.66% CTR), and Tribute Wine, which highlighted a 90-point grade from Wine Enthusiast (13.30% CTR).

In a related development, InMarket reported large growth in spending per customer for 40 beer brands on its platform since the start of the pandemic. While average spend was $13.11 in January/February 2020, the spend jumped to $22.17 during the same months in 2021 and was $18.23 this year, which Della Penna noted was still up 39% from the pre-pandemic spend. (Michelob Ultra, by the way, has led all beer brands this year, with a $32.59 per-customer spend, up 70% from $19.16 two years ago).

“As social distancing made access to bars and restaurants limited, alcohol sales soared,” Della Penna said. “Alcohol brands had to pivot their strategies to meet abruptly evolving behaviors of 21+ consumers, who were quickly stocking up on their favorite liquor.”

The Florida Lottery, in fact, achieved the highest engagement rate of all brands during the second half of 2021: 18.06%, or 30.1 times the industry benchmark.

The Lottery used a gamified, holiday-themed campaign titled "So Much Gift" that prompted consumers to drag gifts from Santa's sleigh into a series of chimneys. Players were then invited to 'Learn More' about holiday lottery games and their potential winnings.

Barilla saw a 5.41% CTR for a campaign promoting its Red Lentil Spaghetti, which included a Target logo.