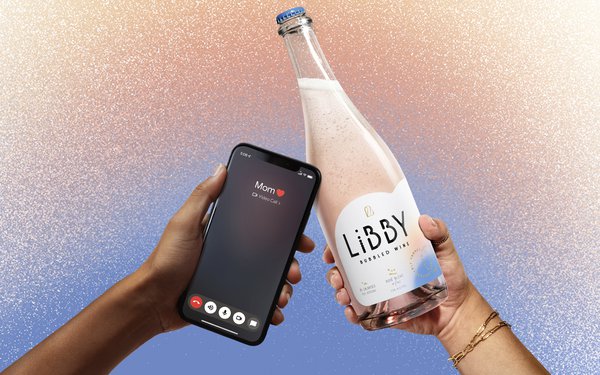 Not to be confused with the venerable Libby’s food brand, the non-possessive Libby (short for “light” and “bubbly”) is a new D2C arrival in the wine space.

Billed as the first bubbled wine, Libby will launch its first major marketing push on Tuesday with a “Call Mom, Win Bubbles” Mother’s Day sweepstakes on Instagram, backed by a paid and organic campaign on the social network.

Entrants can post a screenshot of a video call with their mom and tag/follow @DrinkLibby and #LibbySweepstakes. One will win a free year of bubbled wine (via a check for  $1,296).

The campaign, which ends May 8, consists of both paid and organic stories, reels, videos, and photos. Creative agency is Stagwell’s Minneapolis-based Mono.

But exactly how is bubbled wine different from Champagnes, Proseccos and bruts, which are also carbonated?

Instead of being produced by secondary fermentation within a closed container, bubbled wine gets carbonated through forced air injection just before bottling, Libby founder Grant Hemingway explained to Marketing Daily.

This process allows Libby “to blend any varietal of grape and source from any region to create the best testing blends. This freedom, in conjunction with leveraging technology to dial in the level of carbonation, results in an ability to custom blend and carbonate wines in a consistent, reproducible manner,” Hemingway said.

Libby is currently available in rosé and white varieties, which due to the injected carbonation are also lower in both calories and alcohol content than traditional bubblies, the brand says.

Mother’s Day represents an appropriate time for a wide intro of the wines, which officially launched in March, since the target audience is definitely women.

This was done “to test our market and start getting customer feedback immediately after launch, but the Mother’s Day activation was always planned to be our first full brand campaign,” said Hemmingway,

“Because Libby is a lighter, lower ABV alternative, we leaned into the fact that this product isn't just for a special time, but rather any time," said Mono executive creative director Katie Riddle. She said the campaign brought “a fresh, poppy and playful tone into an otherwise pretentious world,” giving “the audience permission to feel free to enjoy bubbles on the regular."