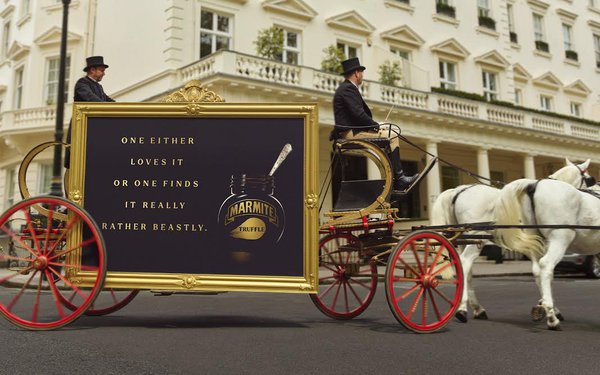 Marmite, a British food staple since 1902, isn’t known as a delicacy.

But adam&eveDDB has given the product, an edible spread made from yeast extract, a by-product of brewing beer, a luxe ad twist.

To underscore its fancy cred, the campaign kicked off an installation — a carriage drawn by white horses, led by a driver in black top hat, to traverse Eaton Square in the fashionable Chelsea section of London.  In typical English tongue-in-check style, the ad read: “One either loves it or finds it really rather beastly.”

The campaign will run through June 26.

The agency’s concept for the new decadent truffle flavor also includes a social campaign, which will run on Facebook, Twitter and Instagram. More print efforts launch at the end of May.

adam&eveDDB’s helped launch Marmite Dynamite in 2020. The new Marmite Truffle is the latest addition to the product line.

Sophie Allan, senior brand manager at Marmite, said: “Britain’s love affair with truffle shows no signs of slowing down, and we’ve carefully curated our new product with the distinct flavor of truffle for the most discerning Marmite connoisseur.”

Marmite is now a trademark owned by Unilever.