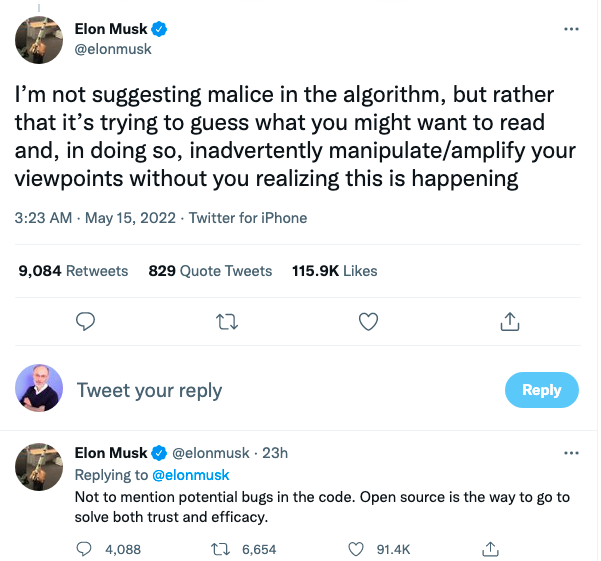 While I still think it’s a bad idea for Elon Musk to own and operate Twitter, I think he’s been making some excellent points about the role algorithms play in curating how we see the world we live in, especially the way we perceive time.

In a series of tweets over the past week, Musk has been encouraging users to manually change their way they view their feeds from Twitter’s algorithm default to a chronological view.

He also said Twitter’s algo should be made “public” for vetting and claimed it was “manipulative,” which caused Twitter Co-Founder and Musk supporter Jack Dorsey to weigh in with an algorithmic defense.

The dust-up made headlines in social media circles over the weekend, but I think the main point isn’t necessarily about Twitter, per se, but about the role all algorithmically processed feeds play in distorting our world view and the fact that most people don’t understand how they work or even how to override them.

This was my biggest pet peeve with Facebook early on, and one of the chief reasons I deleted my account years ago, because its Edge Rank algorithm was increasingly being engineered to manipulate what its users saw, based not on what they personally tagged, but based on what Facebook profits most from: protracted user engagement monetized via exposure to advertising and/or conversions.

And while that may make good business sense, it doesn’t necessarily lead to the best user experience.

Most importantly, I agree with Musk that algorithms should be transparent to users so that people can understand the weight and value they assign to the information they seed, and to also give them the ability to adjust them and/or set different default views.

One of the best examples I’ve ever seen of that kind of interface was in earlier versions of Google News, which enabled users to effectively reset their own algorithms by selecting categories of news (general news, local news, entertainment, business, sports, etc.), and then toggling how much weight they personally wanted to assign to their feeds.

I have no idea if it actually worked, or what was going on behind the scenes, but it at least gave me the sense that I has some control over setting or resetting my own preferences within Google News algorithm.

I’m not sure when Google New abandoned it or why, but I believe Musk is onto something vis a vis giving people the right to both understand and control the algorithms that curate the news and information experience through our feeds, and I suspect it will be the next big battleground for consumer self-sovereignty, as well as regulation.

The truth is, algos are great, and there’s not way we could process the infinite supply of information available to us without them. It’s just that we should be able to understand how they work and have the right to modify them based on what’s most important to us.

There are times when we want algos to take us for a ride, expose us to things related to our journey, which we may not of known even existed in the first place, in order to discover new things.

I think that was the originally genius of Pandora’s music genome project, as the way its music discovery algorithm worked.

I think YouTube one-upped that, though not always in a good way. I mean YouTube’s engagement algorithm is so good, it can almost be addictive, taking you down rabbit holes you never intended to end up in in the first place.

The reality is algos are here to stay and will increasingly be the way people experience information in their worlds. I say “worlds,” because that’s exactly the vision Mark Zuckerberg has for Meta’s metaverse play. He says he wants it to be “the world’s discovery engine.” The problem is he doesn’t way, which world.

So regardless of what happens with Musk’s Twitter soap opera, at least he’s gotten us thinking more about the role of algorithms, and especially the rights of users to both understand and control how they work.