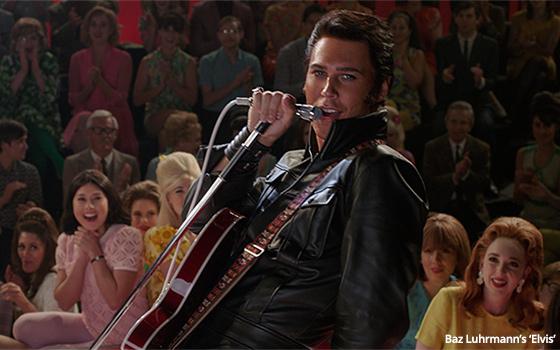 Although it has much less of the usual summer movie action and special effects, Warner Bros.' "Elvis" surged to the top of the North American theatrical ranking -- with some familiar company.

"Elvis" tied Paramount’s "Top Gun: Maverick" -- now in its fifth weekend -- with $30.5 million each in box-office revenue, according to Comscore.

"Top Gun" is now at an "incredible domestic cume through Sunday of $521.7 million," according to Paul Dergarabedian, senior media analyst of Comscore -- and down just 32% from its week four results.

Right behind these two was Universal Pictures' "Jurassic Park: Dominion," now in its third week, at $26.4 million.

Another Universal film, the horror flick “The Black Phone,” scored $23.4 million for its opening weekend.

Somewhat disappointing was Disney’s "Lightyear," now in its second weekend, and falling off the pace with a $17.7 million box-office revenue.

Disney's "Lightyear" and Warner Bros.' "Elvis" posted the most national TV airings over the last two weeks -- at 3,906 and 2,861 respectively, according to iSpot.tv.