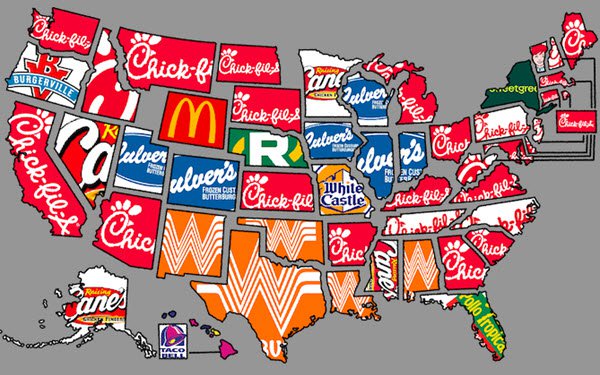 Chick-fil-A has the highest share of Google searches in 27 out of 50 states, according to a study that also shows the search dominance of regional chains like Culver’s and Whataburger.

Separately, a consumer survey by The Harris Poll for the Out of Home Advertising Association of America (OAAA) found more than two-thirds of people who recalled recently seeing a QSR OOH ad saying it had led them to make a purchase at the advertised restaurant.

Chick-fil-A’s high ranking in share of search was measured by brand-tracking provider My Telescope, which says that share of search data has an average correlation of 83% to future share of market and sales.

Chick-fil-A is #1 in states like California — where it has 166 locations — as well as Connecticut (12 locations) and dozens of states in between.

Operating primarily in the Midwest, the Culver’s restaurant chain is tops in Google searches in Illinois, Iowa and Wisconsin but also in Utah.

Texas-based Whataburger is #1 not only in its home state but also in Alabama, Louisiana, New Mexico and Oklahoma.

Notably, the top-searched restaurant in New York is Los Angeles-based Sweetgreen, which launched in 2007.

According to the Harris survey for the OAAA — fielded from May 31 to June 3 — 59% of 1,000 respondents reported having seen an OOH ad for a QSR.

In terms of engagement, among 532 of respondents who had seen a QSR OOH ad and then engaged with the advertised chain, 67% made a purchase at the restaurant’s physical location.

Of those 532, 39% reported having ordered from an advertised QSR via a mobile app or visited the restaurant’s website.