New CNBC Campaign Pitches All Network, All The Time 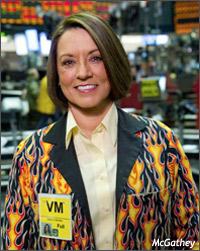 The stock market may be serious business, especially these days, but CNBC is bringing some levity to it in a new on-air campaign. The creative was produced in-house, and CNBC plans only to run it on the network as on-air promos.

The ad takes place at Andel’s Deli in Long Island, where CNBC is a mainstay on the TV and customers exchange tips on stocks vs. bonds and bagels vs. bialis. The friendly owner, Jonathan Geschwind, apparently would never think to switch over to “SportsCenter.”

Presumably, his stock soars no matter the market’s health. There’s celebration food and comfort food. But for at least one customer, a roaring Dow appears to make him a more active buyer.

“The market’s up, keep the food coming,” he says.

The spot has roots in CNBC personality Gary Kaminsky’s affection for the deli. And it fits with the sometimes lighthearted nature of the campaign that the network believes even stressed-out pros will appreciate.

“If you go down to Wall Street and you hang out on any trading floor, humor is all over the place,” said CNBC marketing chief Tom Clendenin.

Between the jokes, the deli ad shows CNBC displayed on an iPhone, hitting on a core message: The network offers market information anytime, anywhere and just about any way. The campaign also focuses on watching CNBC at work, accessing it via an iPad and turning to it with a smartphone.

“It’s about how they use us day in and day out to win,” Clendenin said.

Or at least, try these days …

“If nothing else, the volatility feeds right into the need to stay connected at all times,” he added.

A second new spot stars the effervescent Virginia McGathey, who owns an options/futures trading firm in Chicago. With a smile on her face as a frenetic day unfolds, she says: “The market can run you over.” She’s a big fan of a CNBC mobile app that provides real-time updates from global exchanges.

“The markets never stop -- only when I’m sleeping am I not connected,” she says.

Featured small-business owners in other ads include a cattle rancher and the founder of a New York social club who goes by Jennie Enterprise. The characters all end with “I am American business, I watch CNBC.”

CNBC uses that tag in another iteration of its broad “I am CNBC” campaign that highlights well-known personalities, such as Donald Trump, Sean Combs and Dana White. There are also a run of ads with CNBC personalities speaking about their personal and professional lives. (Maria Bartiromo plays the accordion and wants to be a backup singer.)

The current crop of spots plays into the reality that every American is impacted by the market in some form and the colorful characters might take some of the edge off the current environment.

“These are stories that I think anybody in our world would embrace,” Clendenin said.

Everyone likes a good bagel, right?