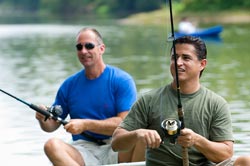 The Chevy Chase, Md.-based insurer is hoping to expand its presence in powersports marketing with the alliance. Outdoor Channel is the exclusive MLF media partner.

GEICO already sponsors pros Christiana Bradley, Teddy Carr, and Robert Pearson, who routinely take on the best bass anglers in the country on both the Bassmasters and FLW tours.

Major League Fishing offers made-for-television events that aim to be more exciting and dramatic than conventional bass fishing tournaments. By using real-time leaderboards in each boat and unlimited fish counts, the format forces competitors to keep up with their rivals or face elimination. To add to the drama, there is no practice time or advance scouting, as venues are revealed at the last moment.

MLF was devised in 2009 when a group of 14 anglers, led by Klein and Boyd Duckett, met to discuss the future of their sport. Together, they agreed the sport of bass fishing needed to be enhanced and that the behind-the-scenes drama and the diverse personalities of the anglers needed to be exposed.

The anglers also wanted fans to be more involved in the tournaments, as well as their lives, by bringing them "on board" during fishing times for an up-close look at how a pro angler competes during an event.