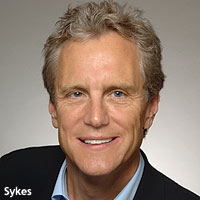 In this role, Sykes will be responsible for leading Clear Channel’s push into TV and live events, as part of its ongoing effort to expand beyond broadcast radio and transform itself into a multiplatform digital content company.

He pointed to Clear Channel’s recent success with the iHeartRadio festival as a model for future live event and entertainment projects under his leadership.

More recently, Sykes and Pittman also worked together at the Pilot Group, which they co-founded in 2008; Pittman then recruited Sykes as a consultant for Clear Channel in early 2011, foreshadowing Pittman’s own rise to the top spot in October of last year.

Sykes is the first major outside hire for Pittman, who has also put his stamp on the radio division with a number of moves intended to enable more coordination between its 850 stations around the country. This included the creation of a new national programming platforms team and new brand management team, which are expected to exert more centralized control over formats and content.