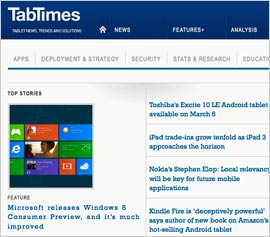 With tablet computer sales growing by leaps and bounds, it was only a matter of time before someone launched a magazine devoted to tablets. That moment has arrived with the launch of TabTimes, a digital news magazine devoted to the seemingly ubiquitous mobile devices -- highlighting their business and work applications along with some less serious uses.

With a mix of news, features, reviews, how-to stories and analyses, TabTimes will report on the tablet industry itself, according to editor George Jones, as well as “the many ways tablets are changing how people communicate, work, shop, play, learn and organize their lives.”

Reviews will cover devices, accessories, and apps, with a focus on business and productivity.

TabTimes is launching as an HTML5 Web app optimized for tablets, including the iPad and Samsung Galaxy Tab 10.1. Other tablet owners can access the same content in blog format on the TabTimes.com Web site. The Web app is launching with Alfresco, an open-source enterprise content management system, as the launch sponsor.

Tablet computers are taking the U.S. and the world by storm. To date, Apple has sold 55 million iPads, with 23 million units moving in 2010 and 32 million in 2011. And that’s just part of the market, according to Gartner -- which estimated total tablet sales at around 64 million in 2011, and predicts sales will rise to 320 million by 2015. By then, about 900 million tablets are expected to be in circulation.