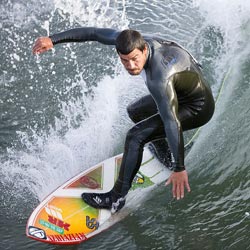 Solspot plans to serve up ads and editorial content tied to visitor preferences and geographic location. The strategy --based on algorithms and concept -- relies on forecast weather, wave conditions, tides and wind. The company, recently named as the official surf forecaster for the 2012 American Pro-Surfing series, will launch the redesigned site Monday.

Irvine, Calif.,-based digital agency The Buddy Group (TBG) supported the design of the new site through a local competition. SolSpot won $40,000 in agency fees from TBG to develop it. The ad exchange OpenX supports the delivery of ads.

Solspot.com pulls in concepts used in forecasting to develop the Web site and content. Using proprietary algorithms, the company crunches historic data with recent numbers pulled in from the National Weather Service. Using a 1,000 x 1,000 meter grid, the technology can forecast wave and weather conditions for a specific spot, such as the Southside of the pier in Huntington Beach, Calif. The contour of the ocean's floor can influence the waves, said Jens Rasmussen, chief surfing (science) officer at Solspot.

Data and algorithms are specific to each surfing spot. Current conditions also are based on buoys in the ocean a couple of hundred miles offshore to read wave heights and swells. This is combined with data from nearby weather stations and digital video recordings that monitor conditions shot from cameras mounted on buildings at the beach to supply forecast data to site visitors.

Rasmussen plans to take that concept further to provide Web site editorial content, such as an article of a local surf shop. He expects the site to generate growth from new site visits between 30% and 40% during the next two to three months. The second phase of this launch will include complete customization and personalization of content on desktop and mobile, he said.