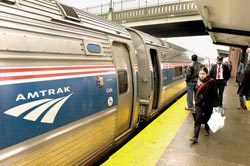 In honor of the fifth anniversary of National Train Day, Amtrak is hosting an online contest inviting train fans to share their travel experiences.

The “See More On A Train” online contest runs through May 29.

Train fans are encouraged to upload their original photos, videos and stories chronicling how they have been inspired by their train travel to NationalTrainDay.com for the chance to win prizes.

A grand-prize winner in each of the three categories will have their choice of one of four provided Amtrak Vacations Tour Packages for two travelers.

Three second-place winners will have the choice between a DSLR Camera with two interchangeable lenses or a mobile carrier gift card worth $500.

The 5th Annual National Train Day, a celebration of trains and the different ways trains touch the lives of people, was held May 12. Tens of thousands of train fans attended Amtrak signature events at Grand Central Terminal in New York, 30th Street Station in Philadelphia, Union Station in Chicago and Los Angeles.