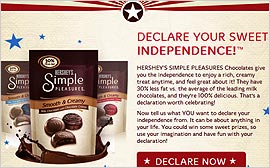 The Hershey Company is employing Facebook engagement activities and sampling events to launch Hershey’s Simple Pleasures, a line of chocolates promising 30% less fat than the average found in the leading milk chocolates.

The campaign, dubbed “Sweet Independence,” plays off a Hershey consumer survey that found 58% of American women reporting that eating certain foods is their #1 source of guilt, and the same percentage agreeing that they “would love to savor their chocolate without guilt.”

The new chocolates line is positioned as one way to “declare independence from guilt” and “enjoy the simple pleasures of life.”

In a Sweet Independence area on the Hershey’s Facebook page, fans who post personal “declarations of independence” of any nature are being entered for chances to win weekly prizes, such as $100 gift cards and Simple Pleasures chocolates.

Chocolate lovers can also make their declarations of independence and be entered for the drawings during “Sweet Independence”-themed sampling events being held this month in Dallas, Atlanta, Los Angeles, San Francisco, Philadelphia, New York and Minneapolis.