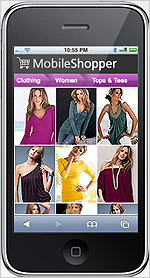 A recent IBM benchmark report showed that mobile commerce accounted for 15% of all online sales in the second quarter, up from 8% a year earlier. One factor behind that increase could simply be that more retailers now offer their own apps. A new study from cross-channel marketing specialist CrossView shows that more than half (56%) of retailers have shopping apps, up from just 12% in 2011.

That finding is part of a broader analysis of retailers' operations and marketing in-store, online, through call-centers and mobile in 2012, compared to last year. Based on their capabilities across each of these areas, CrossView also rates the top retailers based on a mystery shopper approach. Embattled Best Buy again receiving the top score this year. Burlington Coat Factory finished at the bottom of the 26-store ranking.

Aside from the big m-commerce push, the study found that retailers overall made solid, if not dramatic, improvements in cross-channel efforts in 2012. Among the upgraded areas:

*79% offered the same marketing promotion across all touchpoints, up from 65%.

But the study also highlighted continuing weak points for retailers. For example, only half of call-center customer-service reps could see product availability in local stores, while only about half of in-store sales staff could check availability in other stores. And just 28% of retailers offer in-store pick-up for products purchased online.

CrossView also faults retailers for mobile shortcomings, despite the increasing forays into m-commerce. Less than a quarter of businesses, for example, showed whether products were available in-store on their mobile-optimized sites, and just 20% allow in-store pick-up via a mobile site. Furthermore, only about a quarter allowed customers to access their loyalty points through mobile sites.

Of the four channels analyzed, the study found that call-centers were most in need of improvement. It noted that only 8% of customer service reps tried to upsell callers who phone to buy an item, down from 24% last year and 45% in 2009. “The sharp drop over the past three years is likely a function of high turnover rates, lack of knowledgeable advocates and increasing pressure to reduce call times,” the report stated. From a consumer's viewpoint, however, this may not be such an unwelcome trend.

That Best Buy, which recently named a new CEO to reverse its sagging fortunes, should come out on top -- with a perfect score of 280 -- is a bit of a surprise. “Although under pressure to reinvent itself, the retailer continues to get cross-channel right,” states the report. A recent blog post by NPD Group's Stephen Baker suggested Best Buy was suffering from broader stagnation in the consumer technology sector, outside of Apple.

The runner-up to Best Buy in the CrossView ranking was GameStop, with 245 points, followed by Sears (230 points). However, the report cited Sears, Target and Toys “R” Us for failing to show “forward momentum” this year, while Coach and GameStop demonstrated the most improvement, along with Best Buy. Along with Burlington Coat Factory (70 points) at the back of the pack were Hot Topic and dEliA*s.