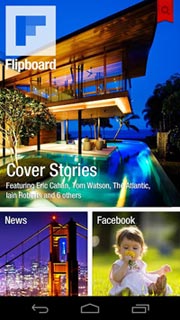 Flipboard has released a version of the popular social magazine reader app designed for Android tablets, including the Samsung Galaxy Tab, Galaxy Note and Google’s Nexus 10.

Because Flipboard is already available for Android phones, people with 7-inch Android tablets -- like the Kindle Fire, Nook and Nexus 7 -- were able to run the phone version on their devices.

Having worked closely with Samsung on its Android phone app, Flipboard said it did so again to come up with a version tailored to its popular models like the Galaxy Tab line.

“As more people buy Android tablets for themselves or others over the holidays, we wanted to make sure Flipboard is part of their tablet experience and deliver on a top request from our readers,” said Eric Alexander, head of international development at Flipboard.

Data from IDC earlier this month projected that Android will make inroads on Apple’s dominance in the tablet market this year, with Android devices worldwide increasing their share from 39.8%  to 42.7%, while the iPad would slip to 54% from 56%. IDC also increased its outlook for overall tablet shipments in 2012 to 122.3 million from 117 million.

Flipboard was originally released on the iPad in 2010 and later extended to the iPhone and iPod Touch. Expanding to Android tablets will help Flipboard widen its audience and should make the app more appealing to advertisers. The company has broadened content in the app to embrace areas like video and books, as well as adding splashy ad formats like the “brand magazine.”