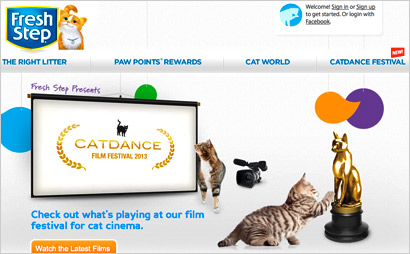 Fresh Step is kicking off the new year by leveraging the Internet to help cats in need and raise funds for the ASPCA with its Catdance promotion.

For more than a decade, the cat litter company had worked with the animal advocacy organization to promote cat adoption and help homeless cats. In recognition of the incredible popularity of cat videos -- they net millions of views on YouTube -- the two are partnering for a contest.

The Catdance Film Festival -- not affiliated but definitely playing on the title of the popular Sundance Film Festival – was a special screening of original, scripted cat films that took place Jan. 19 in Park City, Utah (the same location as Sundance.)

As part of the festival, actress and feline lover AnnaLynne McCord joined Fresh Step in debuting five cat-inspired films from a nationwide search and unveiled a limited-edition, cat-inspired hat that will be available for purchase exclusively at ASPCA.org for $39.99, while supplies last.

Web site visitors who vote are eligible to win the cat-inspired hat. Freshstep will award a total of 1,720 throughout the voting period of the contest. Other prizes include 1,600 coupons awarded randomly for $3 off 42 lb. box of Fresh Step.

Fresh Step is promoting the contest and the hat on its Web site. Web site visitors can vote on their favorite of the five films once each day through Feb. 28. They can share their votes with their Facebook friends and Twitter followers and encourage them to vote as well. The filmmaker that gets the most votes will win a $10,000 grand prize.

The first round of the contest, which ran from Oct. 22 to Dec. 7, invited filmmakers to submit short films shorter than four minutes in length to be considered.

Fresh Step has donated $25,000 to the ASPCA in conjunction with Catdance.