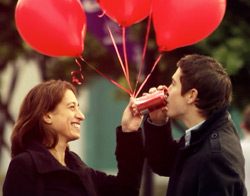 The ad -- filmed in New Zealand by a 23-year-old New Zealander, Hugh Mitton – was awarded first place by Coca-Cola in the 2012 MOFILM Cannes Lions video competition.

The 60-second spot, “Love Is In The Air: A Coca-Cola Valentine,” features red balloons tied to cans of Coca-Cola that float down from the sky to spread happiness to unsuspecting recipients. The ad ends with a Happy Valentine’s Day greeting.

“This work redefines the benchmark of open-sourced excellence,” said Jonathan Mildenhall, Coke’s VP of global advertising strategy and content excellence, adding that “American Idol” is by far the biggest stage the company has given to crowd-sourced content.

Coke will also promote the spot on Facebook and other digital channels.

“It’s one thing to represent happiness as a brand – which we’ve done for more than 126 years – but what we’re trying to do today, more than ever, is to inspire people to create and share happy moments every day,” notes David Campbell, Coke’s global content director.