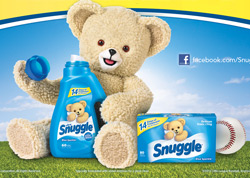 All is all over Little League Baseball and Softball. So is sibling brand Snuggles. The parent company, Wilton, Conn.-based Sun Products Corp., has inked a multi-year deal with the youth baseball program to tout the two cleaning brands. The program involves cross-promotional activity, advertising, digital elements, point of purchase and a big presence during the Little League World Series in Wellingsport, Penn., where the League was founded in the late 1930s.

Although the games are local, the brands get a national presence because the Little League is probably the number one sports league for youngsters worldwide. Not probably. Is. The League, which has 18 sponsors in the U.S., has 2.5 million participants in the U.S. and some 10,000 baseball and softball games every year. While the company obviously isn't activating at the grassroots level for each team, the program is national because of media, online and promotional elements.

Teresa Bello, VP cleaning strategy and VP of the All brand, says this is a first-time deal. "One of the benefits is that as the largest organized youth sports program, Little League has very broad reach. It's one of those organizations that everyone associates with children." She adds that the League actually approached Sun Products.

For the World Series, the company will work with on-site laundry facilities to be the official cleaning product for the games. National TV advertising began earlier in the month, and "with retail and digital and other elements as well, it's really a holistic partnership," says Bello. She says some elements are year round, however, "since the sponsorship is time-relevant to consumers, it's mostly about the season itself.”

The brands will also get national visibility during the World Series itself, since the game is televised and the All and Snuggles brands will be visible on-field. "Sponsors have on-site activation and signage on scoreboards and other places," says Bello, adding that the League will also tout the brands on LittleLeague.org, as well as via communications to coaches, managers and volunteers. All and Snuggles are involved in the on-site laundry service at the big game, as players stay in dorms, and their laundry is done for them on-site.