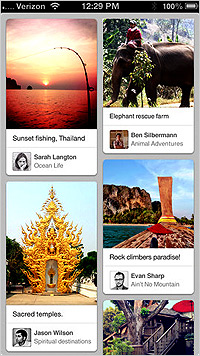 Type "nude" into the search box on Pinterest and it returns items in the color, as well as "artistic" photos and paintings of scantily dressed human beings.

The social site plans to change its posting policy to accommodate complaints from artists and photographers against nudity, according to the Financial Times, but overall, Pinterest pinners like color. In fact, the most repinned images are rich in detail or have multiple colors, according to a study from Curalate.

The company examined the pixels of more than 500,000 images posted by brands to Pinterest, studying about 30 images to analyze faces, texture, hue, saturation, lightness, brightness and aspect ratio.

Brands are increasingly communicating through pictures. According to Apu Gupta, Curalate CEO and co-founder. "If you can have an emotional relationship with a consumer they become more loyal and tolerate faults," he said.

"It goes well beyond color into detail of the objects," Gupta said. "Add science to the creative process we have historically used in print ads, and marketers can almost crowdsource ideas to find out what matters most to consumers."

Images that contain less than 30% background or white space are repinned the most. Repins drop off between two to four times for images containing 40% or more of background area. Images with a smooth texture are repinned up to 17 times more than images with a rough texture.

Brand images without faces receive 23% more repins, and more brands have begun to show clothing items to reduce the price of models and allow the viewer to see themselves in the photo instead.