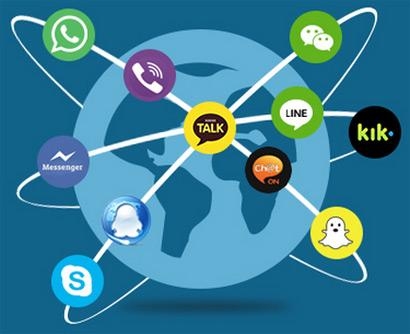 The emergence of mobile chat apps as a real force is one of the mobile marketing stories of 2013, and one that really helps to shift our U.S. focus overseas. Here is where the growth and penetration rates have been staggering. The European and Asian social media agency KRDS has just pulled together scattered metrics to assemble a top ten list of worldwide chat apps and the regional reach that some of them enjoy. Some carriers have already made the mistake of ignoring the scale here, and they likely have lost tens of billions of dollars in messaging to this segment. Marketers can't make the same mistake of missing where youthful engagement is flying.

In some markets the penetration of messaging apps is breathtaking: 90% of Brazilians, 75% of Russians, half of Brits. The Chinese mobile chat market is now reaching 1.48 billion people. And the top app for that country and the world is WeChat, with 600 million registered users, and 100 million on each day. More familiar to U.S. audiences, WhatsApp is slightly smaller than WeChat in registrants (590 million), but it is much larger in MAUs (350 million). The app owns audiences in Brazil, South Africa and Indonesia and is on 95% of phones in Spain. It sends over 10 billion messages a day. Yeah -- that sound you heard is wincing from operators everywhere. China also has the incumbent Web messaging service QQ, with well over 800 million registrants and 478 million MAUs just on mobile.

Just between WeChat and WhatsApp, we are talking about apps with the reach of large nations. And yet their business models are a stark contrast. WeChat offers marketers brand accounts, games and an open API. WhatsApp -- nada. Its CEO, Jan Koum, in a rare public appearance has denounced in-app advertising as destructive to the user experience. He charges a buck to consumers instead.

In the U.S., Facebook Messenger is a wild card player because we know it is huge, but not precisely how huge. KDSL estimates the messaging app alone between 300 million and 550 million registered users. And there are marketing ops in here yet.

The biggie in Japan, of course, is Line, which is on 80% of phones there for 47 million users. As a marketing vehicle Line is perhaps the most evolved, with brand accounts, games, API hooks and especially those branded stickers. Brands offer users free packs of stickers, which otherwise they would be buying in the system to enhance messages. About a billion stickers are sent among people every day on this platform. The platform also allows a brand to send broadcast messages directly to its followers.

Beyond the top four, the scale shrinks modestly down to a mere 100 million to 200 million registered users at apps like Viber and at apps like Snapchat and Samsung's Ch@t On.

In the coming year, marketers will likely be scrambling to capture this decidedly young-skewing audience in these apps. Even more interesting will be how some of the feature sets expand for these apps. They are running parallel to many of the major social networks right now. But some of them are expanding into local search features, timelines, photo and video-sharing, movie chats, and voice calling. There are a lot of constituencies that could be threatened by new companies that mobilized one of the simplest killer apps from the Web.

The challenge for marketers in 2014 is how to tap into this energy. Getting onto the mobile screen is one thing. As advertisers in social media and online chat rooms discovered long ago, the more intimate and engaged the users are with one another, the harder it is to get a marketing message through in any way that feels seamless and elegant.

The full data dump from KRDS is in an infographic online.