iBeacons To Meet Fans At Ballparks Nationwide On Opening Day 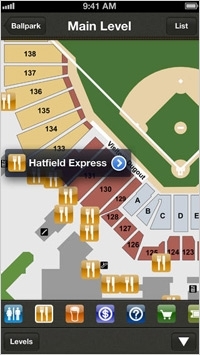 Thousands of Bluetooth LTE iBeacons will be deployed to 20 ballparks in coming weeks to prepare for opening day in late March. According to a report in MacRumors, Major League Baseball will connect the devices to the MLB At The Ballpark app that already helps in-venue users navigate the park and order food and tickets. This will be the largest installation of and test of the iBeacon system outside of the initial deployment in over 200 Apple stores. The venues will include parks in Boston, Milwaukee, San Diego, Los Angeles and San Francisco.

According to the report, app and iBeacon functionality will vary for each venue, since the individual parks had a role in customizing the experience for each environment. Features could include directions within the park, highlighting points of interest, shopping, loyalty programs and concession connections. The app already has ticket purchase and transfer functions, but the iBeacon could add direction to the seat.

MacRumors reports that the main object for now with the iBeacon integration is to improve the live experience for fans rather than monetize the technology. The iBeacon installation complements other projects to upgrade venue connectivity, including better WiFi and cellular signals. Apparently, cell phone use is so intense during big plays that fans experience performance issues at many parks. The iBeacon can be used to trigger some events on phones, but generally other channels are required to make a data transfer.

iBeacons are enjoying a number of tests this season. The ShopKick shopping app is working with Macy’s and American Eagle on in-store trials of the technology. Coca-cola is considering their use at the soccer World Cup. The National Football League has put some iBeacons into Times Square and the Super Bowl venue to send personalized alerts to users during the big game, The New York Times reports.