Local brands are rapidly making use of programmatic ad buying and have more than doubled their share of market spend in the past year.

Not surprisingly, global and national brands still dominate when it comes to dishing out the cash, but they have nonetheless seen their share of spend in the U.S. market decrease from 74% in Q1 2013 to 69% in Q1 2014.

“Programmatic continues to show signs of growth and maturity, reinforced by the incredible rate with which local brands are coming online,” stated Andrew Casale, VP of 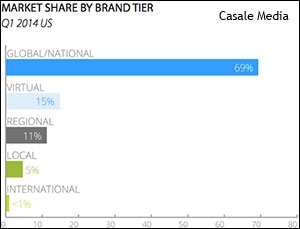 The majority of spend went through just three demand-side platforms (DSPs), although the specific DSPs were not named. The top three DSPs accounted for 48% of the market share, while the top six accounted for 74%.

Comcast was the sixth-biggest spender in Q1 2014, followed by H&R Block, Staples, Sprint Nextel and Chrysler. Of those five brands, only Chrysler was one of the 10 biggest spenders in Q4 as well.

Kaiser Permanente, Progressive Group and Allstate were the other biggest spenders in the financial category, but all spent less than half of what H&R Block did last quarter. The financial sector had the highest quarter-over-quarter growth rate of all sectors in Q1, and was the second-highest-spending sector last quarter, behind only retail. 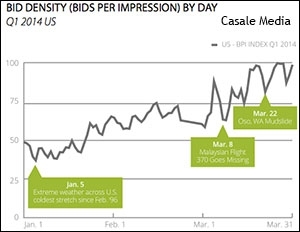 The Q1 Index Report also reaffirmed the relationship between bid density and news cycles. Casale saw bid density -- which is the number of bids per impression -- steadily rise throughout the quarter. However, there were “two pronounced dips towards the end of the period, which correlated with widely publicized negative news events,” the report reads. The negative news events were the disappearance of Malaysian Flight 370 and the Oso, Wash. mudslide.