Summer Of 'Sharknado' - The Sequel 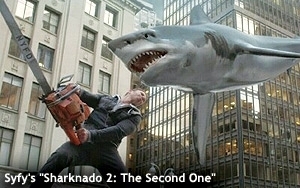 Syfy’s “Sharknado” may be the only movie franchise in history to be the television event of the summer for two consecutive years under completely different circumstances.

As you no doubt recall (especially if you read yesterday’s TV Blog on the subject), “Sharknado” was arguably the most talked-about television program of last summer, at least until the second half of the last season of AMC’s “Breaking Bad” began on August 11, 2013.

That’s an apples-to-oranges comparison, because “Bad” had the benefit of a five-year build up to its last eight episodes, further fueled by all the binge-viewing on Netflix and elsewhere during the break between the two halves of its final season.

“Sharknado,” on the other hand, was just the latest in a long line of those cheapo Syfy monster flicks that have enjoyed significant popularity for many years. It came out of nowhere, with no special advance promotion, and became a true pop-culture sensation even before the end of its first telecast, thanks to a burgeoning real-time response on Twitter by a handful of Hollywood heavyweights and their legions of followers.

The media hasn’t stopped talking about it since.

As luck would have it, “Sharknado” debuted just before the 2013 San Diego Comic-Con, so there was no time to prepare any special promotional activity for it. The truth is none was needed. It did quite well without benefit of everything that exposure at the Con supposedly provides. (There may be a cost-saving lesson in there.) All Syfy could do was instantly announce that it was ordering a sequel and send out a street team to promote it during the Con.

Flash-forward one year and that very sequel was one of the most talked-about properties at SDCC 2014. A panel for “Sharknado 2: The Second One” with most of the cast (except for Tara Reid, who didn’t seem to be missed by the audience) filled one of the larger rooms at the convention center, and a party tied to the movie at the Solamar Hotel (complete with “sharks” in its rooftop pool) was one of the Con’s hottest tickets.

The “Sharknado 2” publicity machine has been in hyper-drive all week, with special screenings in New York City (including one Monday night at Citi Field where an especially memorable sequence in the sequel was filmed) and a barrage of interviews and press coverage. It has been everywhere, even on Fox News’ “The Five”! It was a top story yesterday on NBC’s “Today” show, perhaps because anchor Matt Lauer and weatherman Al Roker all but steal the movie in extended cameos playing themselves. (With all due respect to both gentlemen, I think Kelly Ripa crushed it even more in her foot-stomping cameo.)

I attended the unofficial Los Angeles premiere of “S2” on July 14 at the Beverly Hilton. Actually, it was a special poolside screening put together by Syfy for members of the Television Critics Association during their summer tour at that hotel. I have been a member of the TCA for 25 years and during that time I have never seen the critics have so much fun at an event. The drive-in movie theme of the party, from the food to the decorations to the drinks and more, certainly contributed to the merriment of it all. Various executives from NBCU Cable appeared to be enjoying themselves, too. So did the random celebrity guests who came by, including Judd Nelson and Morgan Fairchild (the latter politely lobbying for a role in “Sharknado 3,” and why not?).

But most importantly the press really “got” the movie. (Syfy positioned it perfectly for even the crustiest of critics.) “Sharknado 2” -- which greatly improves upon the original -- is Grade-A pop-culture cheese and a big-fun summer franchise any television network would be happy to have.

I’m already looking forward to the third film. Where will those Sharknado storms strike next? Presumably they can only happen near salt water.