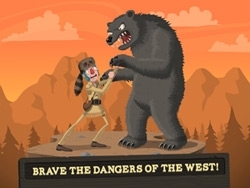 The History Channel has announced the launch of Planet H, a brand extension targeting kids ages seven to 11 with educational content about history. Developed by History and its parent company, A+E Networks, Planet H aims to make learning about history fun by incorporating play, in the form of digital games and other interactive content.

The first Planet H offerings include mobile apps like “Empire Run,” which allows kids to race through ancient empires, hopefully learning about their culture and geography on the way, and “Frontier Heroes,” in which kids compete in mini-games set throughout American history.

Both games were developed in partnership with Red Games, a division of Red Interactive Agency These apps cost $2.99 each and are available for iOS, Android and Kindle Fire. A third game will be released later this year, with more to follow in 2015.

Dan Suratt, A+E Networks’ executive vice president for digital media and brand and content licensing, stated: “There is a void in the marketplace around high-quality, historically inspired content that is dynamic and engaging for kids. Planet H is launching mobile first, but it is a long-term initiative with great potential to reach children with an array of content and products.”

History already has a presence in schools, through a partnership with Houghton Mifflin Harcourt, creating virtual experiences as part of social studies curricula.

Given kids’ affinity for iPads and other mobile devices, it’s no surprise that media companies are rolling out educational apps at a steady pace. Discovery Kids, for example, has over a dozen apps for kids on offer, including a number tied into the Animal Planet franchise and several devoted to the ubiquitous Shark Week.