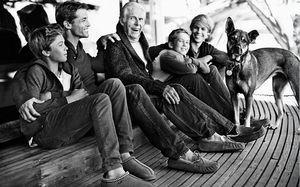 Under the anthem “This is UGG,” the creative seeks to express the emotional power of the brand by celebrating life’s “biggest small moments.”

The campaign, which debuted Aug. 18 around the world, explores the theme that life’s biggest moments are actually the small ones -- a place where the brand lives in consumers’ lives, says Connie Rishwain, President of UGG Australia.

“Whether personal or intimate, reflective or celebratory, it’s often the smaller moments where life’s most important interactions and connections occur,” Rishwain says in a release.

The campaign will use this storytelling platform to showcase such moments and illustrate the fact that UGG “Feels Like Nothing Else.”

“In launching this brand campaign, we challenged ourselves to communicate the unique physical and emotional experience that occurs when you own UGG products,” Rishwain says. “We are showcasing the personal moments where UGG exists in our consumers’ lives. We know how our product enhances any experience, but this is the first time we’ve tried to capture that magic.”

The multimedia, cross-channel campaign presented primarily in black-and-white,features real moments with real people captured in personal settings that celebrate the small moments that mean the most to them.

In one ad, sketch-artist Langley Fox, Ernest Hemingway’s great–great–granddaughter, is featured in her own Los Angeles home working on an illustration project, and later spending time with her best friends. Another shows Tom Brady, who typically appears in UGG campaigns crafted specifically for him, with his mother and father. In another execution, California architect Harry Gesner, who with his son and grandsons all share a lifelong love of the ocean, surf the Malibu coast in a nod to UGG’s surfing roots.

Creative duties were shared by House Design and Film and M+C Saatchi, both Los Angeles.

The brand broke a video campaign for its men’s spring shoes collection in March 2013. Last September, Hearst launched its first native advertising campaign on Harper's Bazaar with Nordstrom promoting the latest UGG Collection to foster strong conversations between the publisher, brands and consumers.