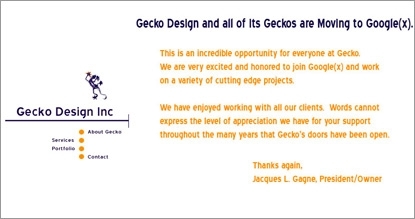 Google has moved to secure product-design capabilities for its research X Lab by acquiring Gecko Design to focus on hardware projects. The news, announced late Friday on Gecko's Web site, adds design talent. Terms of the deal were not disclosed.

Gecko starts with developing consumer electronics, working with engineers early in the process -- but extends through supply chain management, which means moving the raw materials into manufacturing, to finished goods. The company is based in Los Gatos, Calif.

Gecko, founded by Jacques Gagne in 1996, focuses on consumer product development, working with industrial design firms like Fuseproject, frogdesign, and Newdeal Design. Clients like FitBit, a hardware design company that automatically monitors fitness and sleep; Hewlett-Packard home and business, Logitech, and Slingmedia. The company's engineers also worked with Warner Bros on touchscreen monitor components in the futuristic product placement for Dell computers in Spielberg's production of "A.I. Artificial Intelligence" in 2000.

The company's "intimate" familiarity of design for prototype and manufacturing puts Google in an interesting position when it comes to hardware, testing and manufacturing. Google will need supply chain expertise to procure raw materials and a manufacturing faculty or contract with manufacturers like Solectron and Celestica once it begins to build, test and produce hardware.

The knowledge and expertise in engineering will help the company expand all its hardware ventures, from satellites to Google Glass to self-driving cars and beyond. With Gecko now under its wing, Google also could explore semiconductor manufacturing.