For Emmys, Social TV Is Growing Up 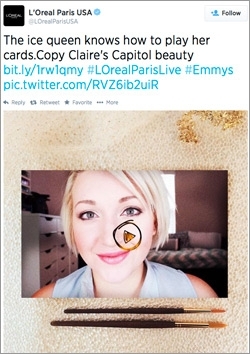 Looks like one of the biggest winners at this year’s Emmys was social TV. While the broadcast ratings for "The 66th Primetime Emmy Awards" was down from last year, it was a bigger hit within the Twittersphere, with Nielsen Social reporting that 8.8 million people saw one or more of the 1.1 million tweets sent during the program. And interestingly, says Deirdre Bannon, Nielsen Social’s VP Product, the Twitter audience is growing up a little, “with 40% of the evening’s tweets sent by people 25 and older.”

Beauty marketers got a big bump, with both Dove and L’Oreal Paris getting an increase of more than 50% in average daily tweets, compared to the prior week. “And we also found that over 50% of tweets sent on the day about each brand came from authors who also sent tweets about the Emmys.”

L'Oreal Paris used the night to carve out new digital territory for itself, partnering with the StyleHaul network for the launch of their Destination Beauty channel. StyleHaul influencer Evelina Barry, for example, created a video of how she created her own red carpet look for the night, which generated 700 comments, engaging with 74,000 followers, and creating two million impressions, says Alison Kennedy, chief revenue officer for StyleHaul. “And that’s just one girl posting content,” she says. “This is the way Millennial consumers are engaging with brands. It’s not necessarily about the live screen, it’s about being able to connect and engage with an influencer. Brands like L’Oreal are trying not just to reach consumers, but also to engage with them in a more meaningful way. These bloggers are influencers are, in a way, the new celebrities.”

That second-screen strategy doesn’t surprise Bannon. “People who talk a lot about TV programs also talk a lot about brands,” she tells Marketing Daily. “We find that 64% of people who tweet about brands also tweet about TV.” And those people are much more enthusiastic about their brand Tweeting than those who don't also post about TV, she says, “which means if you’re looking for an audience that are likely to amplify your brand messaging, finding really social TV programs is a good place to go.”

What’s more, she says, these brand ambassadors have twice as many followers as people who just tweet about brands, “so they are far more influential.”

It all comes back to the way second screens are driving engagement, says Bannon. “Social media has an increasing impact on TV viewing, with people saying they watch more live TV because of what they see on their social media channels. And these numbers are growing year over year.”