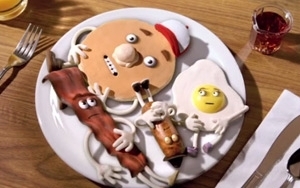 Stoopid Buddy is the studio behind the stop-motion animated comedy series “Robot Chicken,” which has been on the Cartoon Network's Adult Swim since 2005.

The Denny's series, intended to appeal to (wait for it) Millennials, features the adventures of characters based on the menu items in the restaurant chain's signature Grand Slam breakfast: Egg, Pancake, Sausage and Bacon.

The first episode will launch Oct. 15, and several others will be introduced through January.

A preview trailer has been posted on TheGrandSlams.com, an alternate name being used for Denny's' blog. The blog focuses on encouraging social interaction and sharing among the chain's fans, offering links to its social media assets and pages featuring Denny's gifs and selfies, fan selfies, text posts and other social elements.

Fans will also be able to access the series through the brand's mobile app, or by scanning a QR code on the placemats in Denny's restaurants.

The series aims to bring the Denny's brand to life in a "fun, fresh" way that will allow it to connect with Millennials on their terms, said VP, marketing John Dillon.