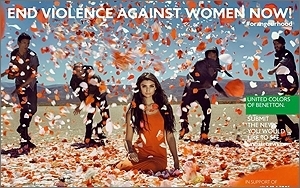 Move over, NFL PSAs. The United Colors of Benetton is putting the power to stop violence against women squarely in the hands of the world’s Millennials. In partnership with the United Nations campaign for the Elimination of Violence Against Women, the new Benetton campaign takes an unexpected swing at a problem that affects one out of three women around the globe.

Spots open on a beautiful young woman seated in the desert, surrounded by a group of angry men, some holding stones, some with clenched fists. But instead of hurting her, they begin showering her with flower petals.

“We have been too much used to seeing violence,” says Erik Ravelo, head of social engagement campaigns of Fabrica, Benetton Group’s communications research center, and creative director of the effort. “Our choice was to show the problem through something that is more emotional, and more beautiful. This is a celebration of the woman, and a stronger emotion than if we showed her bloody, or with a black eye. We chose the flower, not the stone.”

The campaign further looks to step beyond the usual media portrayals of violence by asking those under 30 to become the news media themselves, submitting stories they hope can come true. Using such hashtags as #UNWOMEN, #ORANGEURHOOD and #ENDVIOLENCEAGAINSTWOMEN, people from 18 to 30 are encouraged to upload these self-produced “news” stories. Of the 100 most popular, the Unhate Foundation plans to pick 10 to develop next year.

The focus on Millennials is important, he tells Marketing Daily, “because this is exactly the kind of change that must start from the young generation to the old generation.”

Benetton is a 50-year-old brand, and while its core customers are 25 and up, “the goal of this campaign is to reinforce the perception of our brand to young people and our consumers in general.”

The company hopes that at least 20,000 to 30,000 young people will respond. Its previous #Unemployee effort, which began in 2012 and focused on the plight of young NEETs (Not in Education, Employment or Training) around the world, generated some 50,000 responses. “So, fingers crossed, we may do that well again. This is such an important issue,” he says, “that we are even more optimistic.”

To combat the threat of acid attacks against women, another element of the campaign is called “Facing,” a video that shows the creation of a sculptures of a beautiful woman’s face, achieved by using acid on metal. Plans call for those pieces to be auctioned off, with proceeds benefiting UN Women.

The kickoff is timed for the official start of Orange Days, a 16-day initiative of UN Women, ending Dec. 10, which includes events for women's rights around the world.