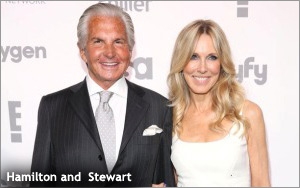 NBC’s cable networks brought the curtain down on TV’s upfront season Thursday night with an emphasis on bigness.

It was the theme adopted at the outset of a wide-ranging presentation staged at New York’s Javits Center on behalf of USA Network, Bravo, E! Entertainment Television, SyFy, Esquire Network and Oxygen — the largest of the cable networks grouped under the NBC Universal Cable Entertainment banner.

Their wares were all presented together -- on a semi-surround mega-screen -- to demonstrate the breadth and diversity of the programming and by extension, the various audiences that NBC Cable has available to advertisers.

“I know it has been a long week, and I like to think that we’ve saved the best for last,” said NBC Cable Chairman Bonnie Hammer to open the event, which was the final such gathering of the upfront season. “Of course, a huge hug to the amazing talent we have joining us today,” she said, “168 in all -- the largest gathering of on-air talent at any event this entire week.

“I challenge anyone to name another event where you would see WWE superstars and divas, multiple Kardashians, the Chrisleys [of “Chrisley Knows Best” on USA], 18 ‘Real’ housewives, the Prancing Elites [of 'The Prancing Elites Project' on Oxygen]” and many more.

The company went to the expense and effort of flying so many of its networks’ stars into New York to make a point about reach and scale. “Nowhere else will you find the strength and reach of our portfolio, a collection of the most unique targeted and diversified brands in the entire business,” Hammer said.

“Our networks have more premium content, truly outstanding programming both scripted and reality, on a scale that you won’t find anywhere else,” she said. “This year, we’ve invested in more original programming than ever before -- 140 series across our networks.”

The remainder of the nearly 90-minute presentation was devoted to showcasing a fraction of that programming -- new shows coming to the air in the coming year.

USA Network promoted three upcoming dramas: “Mr. Robot,” about a computer tech who becomes a covert “hacker vigilante” by night; “Colony,” about a family living in a future L.A. under an occupation by an unidentified foreign (or alien) power; and “Queen of the South,” about a Latin-American woman who becomes a powerful crime kingpin.

Bravo announced three new reality series: “Workout New York,” about a group of personal trainers in the Big Apple; “Apres Ski,” about a posh ski resort; and “Tour Group,” in which a group of strangers will take an exotic journey together. Bravo also announced an upcoming scripted comedy, “Odd Mom Out,” about life on Manhattan’s Upper East Side.

E! promoted “Stewarts & Hamiltons,” a reality series about the families of George Hamilton and Rod Stewart (who are linked via Alana Stewart, who was married to both of them); and perhaps more notably, the upcoming reality series that will document Bruce Jenner’s transformation to female. Jenner wasn’t at the upfront, but he narrated a promo reel for the show, which seems to be titled “My Story,” although that was not 100% certain.

Oxygen announced “Next Gen Boss,” a reality series about the lives of young personal assistants who work for celebrities; and “Time to Quit Your Day Job,” a show in which entrepreneur Randi Zuckerberg, CEO of Zuckerberg Media and sister of Facebook founder Mark Zuckerberg, advises would-be entrepreneurs on how to turn their ideas into lucrative businesses.

Esquire promoted “Somm,” a reality show about wine enthusiasts vying to become sommeliers; “The Agent,” a reality series about sports agents; and a scripted drama series called “Spotless,” about a man who is expert in cleaning up crime scenes.

SyFy announced a miniseries adaptation of the classic science fiction novel “Childhood’s End” by Arthur C. Clarke; a series called “The Magicians,” about a college that teaches real magic; and “The Expanse,” an outer space drama.