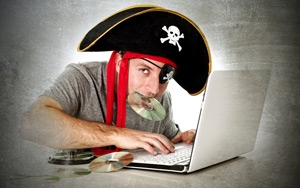 Online content pirates make a nice living from digital advertising -- and a lot of this business comes from ads for premium brands that appear on their sites, raising issues about brand safety and reputation, according to a new study conducted by MediaLink on behalf of the Digital Citizens Alliance.

Overall, piracy Web sites made $209 million from digital advertising in 2014, unchanged from the previous year -- including ads from 131 recognizable brands, up from 89 in 2013.

Over the same period, the proportion of high-traffic piracy Web sites displaying ads from recognizable brands crept up from 28.9% to 32.3%. A previous study by Incopro found that 88% of European pirate sites relied on ad revenue for some or all of their revenues.

Of course, there are continuing efforts by law enforcement, publishers and intellectual property owners to stamp out piracy, but for the most part the pirates just set up shop somewhere else. Almost half the pirated sites identified in 2013 were forced to shut down, but MediaLink still identified 589 sites offering downloads or streaming of pirated content in 2014, virtually unchanged from 596 sites identified in 2013.

The DCA noted that the Interactive Advertising Bureau is moving to address the problem, including an audit to determine exactly how much advertising is appearing on pirate sites.

At the same time, the report also pointed to new challenges, including the rise of consumer-generated streaming video sites like Meerkat and Periscope, which allowed thousands of users to illegally broadcast the Mayweather-Pacquaio fight earlier this month.