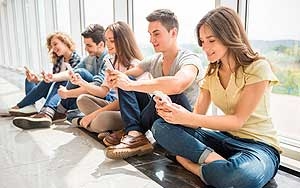 The Interactive Advertising Bureau has released a study conducted with Qriously this week showing that smartphones are the best way to reach college-age students with advertising.

“Today’s college students are leading mobile first lives -- and will surely take their mobile-first mindset with them into the world after graduation,” states Anna Bager, SVP/GM, mobile and video, IAB.

Students were 6% more likely to cite their mobile phone as a medium through which they see relevant ads, with male college students being more likely than females to cite phones as a relevant medium. Only 19% of male students felt that way about TV.

About 49% of average smartphone owners report having acted on an ad they have seen on their smartphones, while 55% of students polled indicated that they have taken an action based on a mobile ad. However, those actions tend to be a little more complex than what most marketers are used to measuring.

Three in four college students said they make purchases on their smartphones. Mobile ecommerce has seen its fair share of criticism for having many friction points — brands haven’t typically optimized shopping for mobile, but it appears that millennials are somewhat willing to persevere for the purchase.

GfK MRI’s recent “Survey of the American Consumer” reported that well-educated female millennials are more likely to make video calls than other demographics, and that those calls would originate on a mobile phone rather than a tablet or e-reader.

All of this information is adding more evidence to the growing movement of mobile-first marketing for millennials.