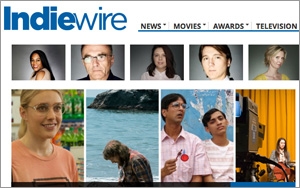 Indiewire.com will join PMC's lineup of entertainment brands, which includes Variety, Deadline Hollywood, TVLine.com and Hollywood Life, among others.

PMC chairman and CEO Jay Penske stated that one of their goals will be to advance Indiewire’s coverage of the TV industry, digital and emerging OTT platforms.

Financial terms of the PMC acquisition were not disclosed.

Founded in 1996 by Eugene Hernandez as iLine, Indiewire has been owned by SnagFilms since 2008.

“After careful consideration of the ingredients that could make the next eight years and beyond even more impactful, we determined that Penske Media would provide the optimum home for Indiewire," SnagFilms Inc. CEO Rick Allen stated of the acquisition.

Allen added that Indiewire has grown 30-fold since 2008.

Indiewire's New York operations will move into the PMC headquarters at 475 Fifth Avenue under management of deputy editor Eric Kohn. Their Los Angeles staff will move into PMC offices there, as well.