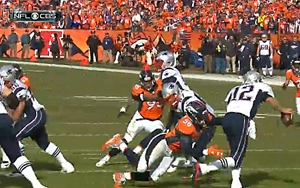 CBS’ close game -- where the Denver Broncos narrowly beat the New England Patriots 20-18 -- was not decided until the final seconds, posting a Nielsen 53.3 million viewers for its best results for an AFC contest in nearly 30 years.

By contrast, Fox’s game, where the Carolina Panthers easily beat the Arizona Cardinals, 49-15 -- a blowout that was decided early in the contest -- took in 45.7 million viewers, and a 14.3 rating among 18-49 viewers.

Fox looked to gain big results for its revival of “X-Files,” which followed the NFC game. It posted 13.5 million viewers and a 5.1 rating among 18-49 viewers -- somewhat lower results than some analysts expected considering the heavy marketing promotion for the new season of limited episode series.