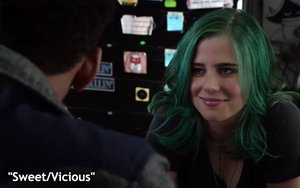 MTV announced an ambitious slate of new shows and specials, and a slew of development deals with high-profile producers — all a bid to “reignite” the once-legendary TV brand going into the upfront sales season.

“We’re on a mission to reignite MTV with everything that makes it one of the world’s most iconic brands – its soul of music, its love of pop culture, and its unexpected, groundbreaking creative,” said MTV President Sean Atkins in a prepared statement, prior to the Thursday upfront.

“What we share today is just the beginning, but it’s a strong first step in the journey and shows how aggressively we are moving to energize the extraordinary promise of this great brand.”

MTV’s programming plans are being closely watched this upfront season because it’s the first slate of new shows to be presented to the advertising community since Atkins became president of the network. MTV’s programming department was restructured last year.

Atkins was hired away last September from Discovery Networks, where he had been general manager and executive vice president of digital media and strategy.

For this year’s upfront, the newly revamped programming team at MTV has come up with 14 new series and specials, including a weekly, live music performance series, the first one on MTV in nearly 20 years, called “Wonderland.” Originating from Los Angeles, the show will feature performances from three different artists in every episode.

“Sweet/Vicious,” a new drama series about a pair of young women who become self-styled vigilantes, seeking to avenge victims of sexual assault on a college campus. Another show about a pair of buds, “Mary + Jane,” is a comedy about to marijuana dealers in L.A.

Two docuseries that seem to be inspired by HBO’s “Vice” – “The Outsiders,” about families living on the fringes of society; and “MTV’s The Investigation,” featuring Ryan Ferguson, a man wrongfully imprisoned for 10 years will dig into cases of wrongful convictions like his own.

There is also a reality-competition show called “Stranded with a Million Bucks,” in which contestants will battle brutal conditions on a remote island with just one possession, a suitcase containing a million dollars. MTV says the show will be filmed with drone camera technology.