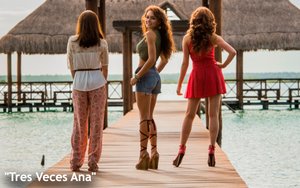 Univision Communications on Friday announced seven new comedies and eight new drama series for next season in advance of its upfront presentation scheduled for next Tuesday in New York.

The shows are earmarked for various UCI-owned networks, including Univision, the longtime ratings leader in U.S. Hispanic television, UniMás, the company’s younger-skewing network aimed at the 18-34 demo; Galavision, Fusion and Univision Digital.

Univision’s announcement provided a glimpse into the company’s strategy for this year’s presentation.

The main emphasis of the company’s message to advertisers will be about the company’s reach into the U.S. Hispanic community via linear and digital platforms.

“By organizing around key content verticals, UCI is now offering marketers a new way to do business that will allow them to target UCI’s audiences more systematically and leverage the estimated 81 million average monthly unduplicated media consumers UCI reaches across its media portfolio -- a reach that has grown by more than 40% since first quarter 2015 as a result of acquisitions, partnerships and strategic investments,” the company said.

“UCI also now enables advertisers to leverage premium inventory, including new fall programming, at scale and in each content vertical, as part of an expanded programmatic buying effort across both digital and linear platforms.”

Leading Univision’s presentation will be Keith Turner, president of advertising sales and marketing for Univision, and Steve Mandala, EVP of advertising sales. “Univision is evolving to be a media company of the future, with more catered programming and advanced offerings that better position us to reach a rapidly evolving consumer marketplace,” said Univision President and CEO Randy Falco.

The company’s new drama series for the 2016-17 season include:

“Mujeres de Negro” (”Women in Black”) on Univision, the story of “three strong female characters who develop a radical plan to take control of their lives” — namely, kill their husbands and then “seek out new adventures.”

“Tres Veces Ana” (“The Three Sides of Ana”) on Univision, a series in which one actress — Hispanic TV star Angelique Boyer — will play triplets with “very different personalities” — all raised by separate families, and all named Ana.

“La Candidata” (“The Candidate”) on Univision, the story of a female politician who decides to run for president against her corrupt politician husband.

“Bloque de Busqueda” (“Search Squard”) on UniMás about an elite squad of law enforcement officer whose job is to apprehend the world’s most notorious criminals.

“Super X’s” on Univision, featuring two 30-year-old male friends who still live with their parents until one day one of them develops superpowers. But the problem is: These new superpowers aren’t very reliable, which complicates their lives.