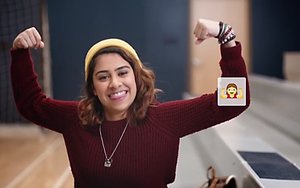 Despite the accolades and attention given to commercials and other media that feature women and girls in prominent (and positive) roles, there’s still a big gap between what is seen in entertainment and what is happening in the real world.

The Association of National Advertisers’ Alliance for Family Entertainment (ANA AFE) is looking to change that with #SeeHer, a new initiative to push for a more “accurate” portrayal of girls and women in media by 2020. (The program’s actual metric is to see a 20% improvement in portrayals by that date, which is the 100th anniversary of women’s suffrage.)

“There’s a high dissatisfaction among parents [about] the portrayal of women and girls in media,” Stephen Quinn, chairman of the AFE, tells Marketing Daily. “It’s a relatively narrow portrayal overall [for women] … From their perspective, they’re not being seen on screen.”

The #SeeHer initiative will push for the “accurate and authentic” portrayal of women and girls in media by working with marketers to: review content and advertising for “unconscious bias;” work to actively place ads on programming that accurately portray girls and women, and promote the #SeeHer hashtag to consumers. Although the terms “accurate and authentic” may seem broad and vague, they are intended to reflect reality, Quinn says.

“Part of this is just portraying them in their diversity,” he says. “Women are much less represented in STEM [roles] on TV than they have been in reality. The media is behind.”

The ANA AFE will also provide marketers, ad agencies, media agencies and content creators with toolkits and scorecards to measure female portrayals in their own work and set up a data-tracking Gender Equality Measure to identify the best-in-class advertising and programming that supports girls and women. (The ANA AFE will also set up a Web site where consumers can see ads and programming that put these goals into practice.)

The ANA AFE will point to its own research that shows women make or influence 93% of food purchases, 85% of consumer purchases are made or influenced by women, and about 90% of vacation decisions. Placing messaging in the “right advertising environment for women” can also increase ad effectiveness by 30%, according to the ANA AFE.

“The focus on marketers is to get their commitment to move their dollars to programming that is doing a good job of portraying women and girls,” Quinn says. “Marketers will also be able to [use] this to look at their own content they’re creating.”