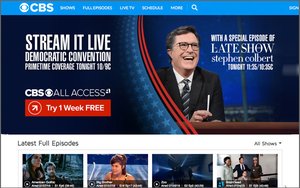 CBS is touting massive gains in upfront activity for the upcoming 2016-2017 TV season.

“We just concluded the strongest upfront we have seen in many years,” said Les Moonves, chairman/CEO of CBS Corp., in remarks to analysts in an earnings phone call. “We led the upfront with double-digit price increases and healthy gains in volume.”

Moonves added that CBS Television Network's sellout of its upfront inventory was in the “high 70s” percentage range.

Upfront price increases for late-night programming, Moonves said, were “even more than prime time.” New CBS ownership of its late-night TV shows -- “The Late Show with Stephen Colbert” and “The Late Late Show with James Corden” -- will mean higher profits for CBS, he says.

CBS says its sees continued strong advertising revenues for the second half of the year. Moonves says some scatter pricing in the previous months was 30% above the pricing set in upfront market.

One major business area of gains -- retrans fees -- was up 44% in the period. The company said it i tracking to pull in $1 billion retrans revenues this year.

CBS local broadcasting -- TV and radio stations -- witnessed a 1% slip in revenues to $647 million because of the absence of the NCAA Tournament finals and lower local radio advertising sales.

With regard to its new OTT digital services -- CBS All Access and Showtime -- the company said each service has 1 million subscribers. CBS executives characterizes those subscribers as younger, around 40 years old and more slightly female.

The company said: “We anticipate a significant lift next year with the launch of our new “Star Trek” series on CBS and “Twin Peaks” on Showtime.

Because of its many international TV distribution deals, as well as a major digital video deal with Netflix, Moonves says the new “Star Trek” series is now immediately profitable.